Immersive theatre – however we got so immersed, give it a go, there’s something out there for everyone

I blame Deirdre Rachid. What was is about that storyline that got the nation so riled up and wanting to actually get involved in the show?

Over the last decade or so, we have been given control over all forms of entertainment which we partake in. We vote for the next pop stars, the next person to appear on the Royal Variety Show, what dish someone is going to have cooked for them or the outcome of a storyline on a soap. Computer games “remember” the decisions you make and these decisions affect what experience the player has in the next edition of that game.

Has it been decided, or have we decided, that we must have control, some sort of interaction, over the entertainment we are enjoying? We must be completely immersed in it, we can’t just sit back and watch what is going on in front of us.

When I was younger, there were much more simple versions of this immersive style -“pick your adventure” books – “turn to page 15 if you want to take the blue drink, turn to page 84 for the red one.” And then the drama unfolds depending on your choice. I was always concerned, however, that the more exciting option was available on the other route. Is this the problem with immersive theatre too? What if you choose “incorrectly” and you don’t see the best. Would it be better for a writer to tell you what the “right” option is and let you experience it?

Now, I have to say, I love immersive theatre and, in my book, there isn’t enough of it, but I do understand why some people don’t. You never know what you’re going to be faced with, how much you will be expected to do or to what extent you will be immersed. Youmebumbumtrain have done a show where you are the star; going around the rooms on your own and experiencing various different situations; being interviewed, running an exercise class, getting thrust into a working kitchen. What is the theme, the story, the point? What if the situation you are faced with, completely throws you?

I guess it depends on the type of immersion you experience.

Immer_city immersed their audience in their show, Wyrd, weeks before the “real” performance began. Facebook and Twitter profiles were set up for the characters, “pre show” events such as hen and stag do’s as well as false websites with clues about what you were going to experience. And then on the day, the performance began in the pub, meeting the cast to have your palms read, learning the backgrounds of each of the characters – if you were willing to question them. 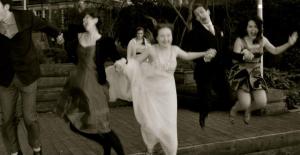 It wasn’t necessary to have read everything or even to throw yourself in at the deep end and join in fully in the performance, but it certainly helped and really made for a fantastic couple of weeks of entertainment.

The Drowned Man has been incredibly well received but there are still a handful of people who just don’t get it – possibly not helped by the fact that one person might say that they were involved in a naked rave, that they found the roof top bar, that they were hurried away into a caravan to watch someone put their make up on.…. and yet what did you see? None of this? How can you possibly have got the same experience, did you miss some of the show, something important which made the whole thing make sense?

Some immersive/promenade shows just ask you to walk around and look into theatre spaces and watch what is unfolding. The immersive bit here is just that you are moving around. This was the case at St Pauls Church in Covent Garden where Iris Theatre put on various shows including “Alice in Wonderland” and “Julius Caesar”

My review of Julius Caesar : http://everything-theatre.co.uk/2013/07/julius-caesar-st-pauls-church.html

So what are we in for next, how can these companies go even further? Upcoming immersive shows include an overnight performance of Macbeth where the audience get to eat with the Macbeths, sleep in their rooms and watch as the story unfolds overnight. Rehearsals have begun and everyone who is going has started to receive their passports for the event. There are still some tickets left and I truly think this is going to be one of the most interesting immersive shows that there has been for sometime. Get your tickets before its too late. http://macbeth.in/collections/Macbeth and follow them with #RiftMacbeth on Twitter.

Also, part of the Festival of Theatre (LIFT 2014) is  “Roof”. Occupying a purpose-built ‘panoramic performance space’ on top of the car park opposite the National Theatre, it has been conceived by the mastermind of the incredibly successful “Ring”, David Rosenberg. Ring used clever panoramic headphones to create an incredibly unique  and almost  hallucinogenic experience, and set completely in the dark. Roof is set to be just as exciting.

So back to the start of this reflection, to explain my first comment. I don’t know when this immersive theatre malarkey began. What it with Deirdre Rashid going to prison in 1998 in Coronation Street? “Free Deirdre” placards and protests being carried out by viewers. They wanted to get completely involved, have a say in what happened and immerse themselves in the storyline. Have we created this phenomena of immersive theatre ourselves? 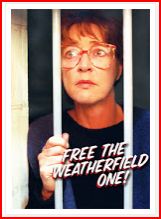 Some people think theatre is becoming “too immersive” whatever that means. I have to say, I disagree. There is still plenty of “straight” theatre out there if that’s what you want and you needn’t attend these sorts of shows if they aren’t for you. Don’t like ballet? Don’t go. This is exactly the same – just another genre of theatre. As I said, I absolutely love immersive/promenade theatre and think everyone should at least give it a couple of tries. I cannot wait for my next installment (Rift’s Macbeth)

Let me know what you think.