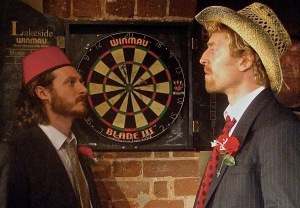 So two guys walk in to a pub and start playing darts…it sounds like the intro to a really bad joke. But it was the totally original opening to ‘Mugs Arrows’. The compelling tale of Pat and Ed, pondering the aftermath of their friend Simon’s wedding. There’s something very fitting about a pub staging a play set in a pub. The Old Red Lion is a wonderfully nostalgic setting with its snug bar and intimate atmosphere preserving the image of a traditional pub. Upstairs, the theatre plays host to a weird and wonderful story that never fails to hold your attention. A lecture style layout gives the audience a great view wherever they sit. You feel privy to the characters as their chaotic existence slowly begins to unfold. With drink in hand, a familiar scenario springs to mind. You’re meeting a friend and you’re early, but can’t help overhearing a conversation while you wait. You’re trying not to listen, but there’s something so strange happening you can’t help but listen. With this analogy chipping away I was immediately hooked. However, unlike overheard pub conversations you get to hear the whole story.

Pat was Simon’s best man and Ed is Pat’s best friend. The conversation slowly builds from mundane social chat to deep self analysis that’s both disturbing and extremely funny. We gradually begin to understand the complexity of Pat and Ed’s relationship. They are soon joined by Simon’s bride Sarah, who adds a beautiful, mesmerising presence to proceedings. Our deadly duo are transfixed and unhinged, but gamely fight her powers of manipulation. We are treated to the full range of human emotions – anger, greed, jealousy and passion are all thrown into the mix. We even get a spot of karaoke which trust me, works within the play’s context and maintains the weirdness level quite nicely. The story also branches into the realms of fantasy, dreams and symbolism. You may therefore arrive at more than one conclusion as to what it all means. The characters are very well drawn as they show you everything but ultimately, tell you nothing for certain. So never felt I got to the bottom of the characters. But therein lay the skill and beauty of such writing. We all interpret this type of story in our own way. Some will be infuriated by it; others will glory in its weirdness and complexity.

The cast were faultless in their execution of the story. Writer Eddie Elks was excellent as the cool, enigmatic Ed; Rhys King was thoroughly convincing as the angst ridden Pat and Chiara Wilde was stunning as the artful, controlling Sarah. I thoroughly enjoyed this play, because it challenges the general convention that a story has to be told in straight lines. It will twist and turn into different angles and leave you wondering where that particular line came from, and why it came in where it did? But the reward is there, they just make you work harder to find it. My friend and I also met Chiara Wilde and shook hands with Eddie Elks in the bar afterwards. How often do you get to meet the writer and co-star of the play you’ve just seen?