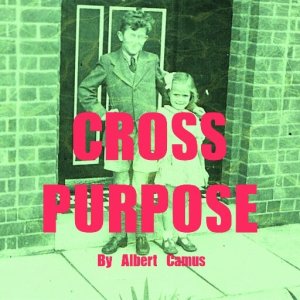 Upon entering the eerie, damp recesses of the Crypt, an emblazoned message screamed out…’I will rock your world with my art and poetry’. So says Eugene Macki creator of the exhibition running concurrently with cross purpose. As there was time to kill, I wandered round the strategically placed exhibits: 17 rotting oranges, 6 empty picture frames, a wheelbarrow, a step-ladder suspended from the ceiling to name but a few. Eugene had helpfully scribbled some notes to aid interpretation. He stressed that ‘this space is sometimes loud…very romantic’ and that this may be a gallery but he hadn’t told us this was art…and to ’ask another question’. I determined this must be linked to Albert Camus, the play’s author and pioneer of absurdism; that is the conflict between the quest to seek value and meaning in life and the human inability to do so. On second thoughts, maybe I should concentrate on the play?

We were led through the gallery into an ante-room, with sparse brickwork and minimal lighting which reminded me of an SAS interrogation bunker. The story, set in occupied France during World War II tells the story of Jan, a man who returns home after 15 years away living in the Czech Republic. He meets his mother and sister Martha, who been making a living taking in lodgers, murdering them and stealing their money. Now the credibility gap in the story begins to widen. Mother and sister fail to recognise Jan, who mystifyingly decides not to reveal his identity. It’s not a huge stretch of the imagination to guess what happens next, and there is an element of predictability about the entire story. Whilst we happily suspend our disbelief to fully appreciate the script, the story does struggle in the outlined scenario. Jan even offered Martha the opportunity to check his passport which would have revealed in his true ID but she declined. Readers will no doubt hazard a reasonable guess at the eventual outcome, but I’ll not spoil it for those who want to see the show.

Needless to say, the cast do a first rate job, ably led by the excellent Susannah Hamilton as mother; Lucy Kirkpatrick as the manipulative, scheming and downright creepy Martha; Haydn Whiteside, as the angelic unassuming Jan; Andrew Boxer as the Manservant, who doesn’t speak until the final line is uttered and Asha Reid as Maria, Jan’s tearful wife. With crystal clear diction, every syllable and word echoes around the crypt creating a unique atmosphere. While Camus would probably have laughed at my attempt to rationalise a story that trades on absurdism in extremis, there has to be some logic applied here. How could mother and Martha not recognise Jan? According to the story, Jan had been away from home since he was 16. Do people’s physical characteristics change that much between the ages of 16 and 31? As always, it’s the cast that breathe life into an otherwise flat story with one dimensional characters. The question is, what would Eugene would have made of it?