#Tweetingit – 5* A truly mind-blowing combination of acrobatics, mime and physical drama, but don’t try this at home kids.

A giant purple cow certainly adds a new dimension to the London skyline; but I’m prepared to go with it such are the joys of a pre summer evening in London. I am pleased to say, Udderbelly is back at the Southbank, complete with a merchandise stall, beer stands and the smell of burgers wafting on the breeze, it feels like a music festival. This is what summer in London is all about!

Until now, my only experience of seeing live acrobats was in traditional big top circus as the ugly spectre of caged animals and clowns loomed large.   Happily, the bad parts have been stripped away and we are left with excellent circus companies like Circa, who now return to London with a mesmerising up close acrobatics show.  The five strong troop consist of Jarred Dewey, swinging trapeze specialist; Lisa Goldsworthy, demon of the hula hoop; Lauren Herley, seductive rope artist; Daniel O’Brien, hand balancing guru and Kimberly O’Brien, a study in suppleness. All displayed immense dexterity as they seamlessly moved from one routine to the next, barely breaking into a sweat. I sat; slack jawed in disbelief as these wonderful performers pushed their bodies to the very limits of physicality.  You sensed every move, every breath was analysed for degrees of difficulty, and then the bar was 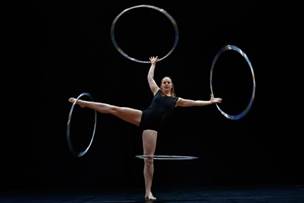 pushed even higher.  I can only imagine the injuries they must have sustained in perfecting routines that leave very little room for error.  For example, Lauren Herley executed a beautifully judged rope act; she stretched and contorted her body up and down the rope, wrapping successive limbs as she went; at one point twisting the cord around her neck, which could so easily go wrong.  In the programme notes Lauren commented that she enjoys risk and the beauty of pain.  Hmm…I definitely made the right decision not to become an acrobat.

While traditional tumbling, handstands and trapeze all feature, there were routines I had never seen before. A series of tricks with five chairs were brilliantly inventive, displaying a level of balance and control that has to be seen to be believed. Even though the core element is acrobatics, there is a significant nod to mime a la Marcel Marceau, and an eclectic mix of songs including bang bang, send in the clowns and Lou Reed’s Pale Blue Eyes were beautifully interpreted.  It’s difficult to find superlatives to describe this show; I’ve used a few in this, but none seem adequate.  All I have got is that it was an absolute privilege to witness such a dazzling performance.