#Tweetingit: The Spiegeltent and Big Purple Cow have made their way to the Southbank once more and we are certainly in for a treat!

The biggest and most eclectic festival of entertainment is back for a fifth year and there’s so much to see, I don’t know where to even begin! 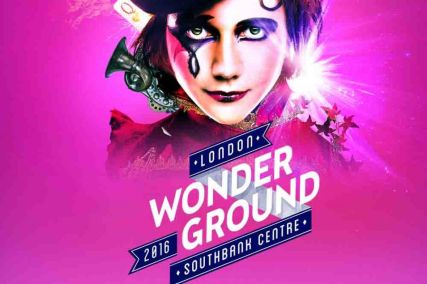 Well – actually I did – Closer is possibly the most incredible thing I have ever seen – (Please click here for the Closer review). I wont say more here. Just have a look, its incredible. It runs from 7th April – 12th June so get your tickets NOW

The big purple cow will host acts such as Gobsmacked: an electrifying acapella-beatbox journey through musical history, running from 16th June – 17th July. There’s also Reginald D. Hunter and Nina Conti, alternative and interactive entertainment, including Margaret Thatcher: Queen of Soho, the QI Elves No Such Thing as a Fish and Wi-Fi Wars, and family shows including Brainiac Live!, Shlomo’s Amazing Beatbox Adventure for Kids and Showstopper’s Fantasy Story Factory.

Alongside this  is the Spiegeltent, and headlining this year is the world premiere of the swaggeringly sexy Wild West circus-cabaret The Raunch – the brainchild of cabaret legend Empress Stah, featuring a raucous range of circus skills, captivating music (including an original song by Peaches) and filthy humour from a motley crew of cowboys, braves and blaggards. 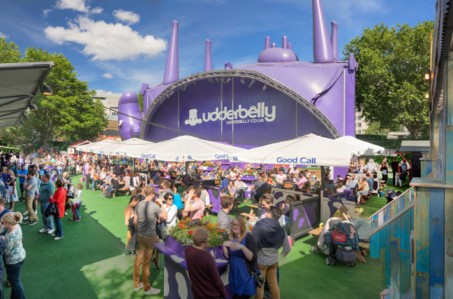 Joining them is magnificently bearded, prodigiously talented and insanely cool Canadian troupe Cirque Alfonse with the London premiere of their electro-trad circus-cabaret epic Barbu – one of the breakout hits of the 2015 Edinburgh Festival Fringe.

Wonderground also provides a platform for some of the finest comedy in the land including live performances from television stars Debra Stephenson and Jess Robinson, theatrical comedy spectaculars in Sh*t-Faced Showtime (Pirates of Penzance from those Shakespeare drunkards) and Twelfth Night With Comedians, and some of the most dazzling drag and character comedy in the world, including c*untry singing sensation Tina C, bad granny Ida Barr, the queen of Ireland Panti Bliss, Rotherham’s least-celebrated daughter Myra Dubois, and one of the original cast of Pruscilla Queen of the Desert, Trevor Ashley as Liza.

Treats for the whole family include one of the star attractions of the 2015 Edinburgh Fringe, DIY circus from Trash Test Dummies, Metta Theatre’s ebullient mixture of dance, puppetry and spoken work, which combine to create a brand new adaptation of Kipling’s Jungle Book, time-travelling magic from Morgan and West, lessons in rock’n’roll from the award-winning Tess Waters in How To Be A Rockstar, installation storytelling from Bedtime Stories, beatboxing adventures with Shlomo and a dance party for the whole family in Monski Mouse’s Baby Disco Dancehall.

Combine this amazing live entertainment with an excellent range of street food and drink and one of the coolest outdoor drinking spots in the city, and it’s easy to see how London Wonderground has become one of the capital’s essential outdoor destinations.

So, best get down there. Don’t miss out!!