#Tweetingit – There’s not much to say except that this is an absolute must-see.

Knife Edge is an all-singing, all-dancing performance. Being British, and therefore the natural enemy of enthusiasm, song and dance, I was initially terrified, because in an 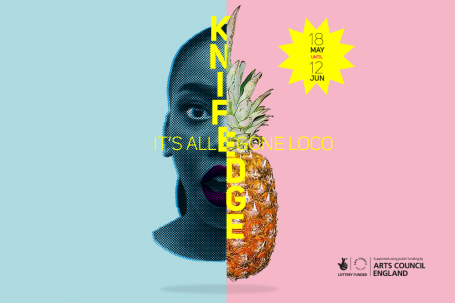 immersive, 4th wall-breaking theatre, there is a spectrum from Secret Cinema (fantastic) to the nightmarish hell-realm known as Butlins. Joined by 48 other audience members in varying states of bafflement, we were led inside what looked like the quintessential Shoreditch warehouse hipster rave venue, complete with exposed brickwork, an atmosphere of dry ice, and at least one audience member who… vapes.

Following the story of The Girl With No Name, a 17-year-old girl g
rowing up in a hostel, beautiful and fierce, her mother dead and her father absentee, full of rage, in a caustic relationship with a 21-year-old aspiring hood rat. The commencement of the play was announced by a loud bongo drum solo, and each scene change (often corresponding with following the cast to a new room) was signalled by similar musical interludes. The characters wander through the crowd, bright strobe lights and music (both live and recorded) accentuating the mood.

“Babes, I can’t adopt you. I’m your dad,” and others, perfectly summarising the emotionally supportive waster parent.

The chorus serves as an external set of figures, removed from time, given some manner of awareness of the story, but unreliable as narrators, contradicting one another about the story as if they remember it differently, but occasionally speaking about the story as if it is still ongoing, speaking about “what the story needs” as if it is still being written, and actively referencing other plays/books (particularly The Curious Incident of the Dog in the Night-Time). 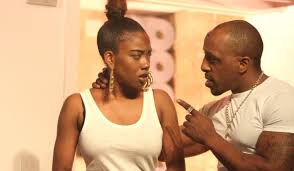 Strong themes of classical Greek literature (which I won’t spoil for you) and satire of famous figures (the pretentious ex-con called Ralph, who militantly insists that his name be pronounced ‘Rafe’) blend to form an eclectic mixture thoroughly enjoyable to behold. Billed as a play beginning with a murder and ending with a feast, it is more a play about tragedy and redemption, about taking base ingredients and combining them to form something spectacular.

An inspiring production in its own right, only aided by the remarkable facts that 90% of the cast are amateurs, that the story is heavily inspired by the truth, and that the charity behind the play is doing divine work with those in need. I solemnly swear that I loved the play before being fed, as well.