I have never been a big fan of Charlotte Bronte’s Jane Eyre. I have always struggled to relate to Jane both when reading the book and watching film adaptations, but Dreda Blow’s intensely emotional performance completely won me over.

During the performance I spent a fair bit of time being overwhelmed by the bleakness of the story. The set, the costumes and the choreography were harsh and cold, much like the frightening scenes portrayed in the novel. You find yourself searching for warmth, hoping for a change in lighting or a kind gesture between characters. 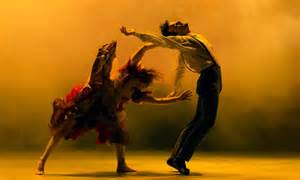 The score, created by Philip Feeney plays a crucial part in this. It took me a while to decide whether I liked the music, it has some odd moments and takes a while to get into its stride, but overall I felt it was successful in helping narrate the storyline and creating the atmosphere the scene required.

The first moment in this show when you really start to connect with Jane is when her friend Helen dies. Performed by Kiara Flavin, Helen is only on stage a short while, but it was long enough to leave the audience feeling bereft at her departure. It was one of those brief moments of warmth before the stage became shadowy and cold again. The Orphans who surrounded Jane and Helen (performed by Pippa Moore, Rachael Gillespie, Abigail Prudames, Mariana Rodrigues, Dominique Larose and Jenny Hackwell) also gave excellent performances, making this one of the strongest scenes in the show.

The second moment that has stayed with me was Mr Rochester’s entrance. I have never seen anyone enter their living room in this way before.

Played by Javier Torres, Mr Rochester leaps onto stage with exuberance and playfulness. This, and the fact that on this occasion Mr Rochester is a very good looking man, make it easy to see why Jane would fall in love with him.

As the story progresses the relationship between Mr Rochester and Jane intensifies. There are lots of cool looking lifts and romantic moments that all Jane Eyre and ballet fans will love.

Although I did enjoy the performance there were a few bits where I did feel lost. I found the dances with the D-Men a bit puzzling, I couldn’t work out how they fit into the storyline and despite the competence of the dancers I did not enjoy these bits. I think I would have preferred for Jane’s moments of torment to have been expressed in some other way, it would have been great to have seen more solos during the performance.

There is just one other thing that bothered me about the performance and that is the character development of Bertha Mason, Mr Rochester’s ‘mad wife’ in the attic. She was portrayed as the villain, attempting to destroy Jane’s happiness in a dramatic and violent scene between her and Mr Rochester. But for a modern audience this character raises some serious questions around how Mr Rochester has treated his wife and what exactly is causing her to behave this way. Perhaps, given its importance and how hard it must be to fit an entire Charlotte Bronte novel into one ballet, this is a matter for a separate performance.