The musical about the part of her life you didn’t know you wanted to know about. I’m not 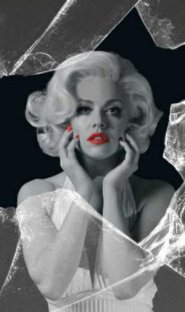 really a Marilyn Monroe fan, aside from being aware of who she was, a couple of major films she was in and the tragic circumstances of her early death, I don’t think I could tell you a thing about her so very much went into this show blind.

Let’s say it was quite the eye opener.  Based on a stay in her secure medical facility that took place in 1961 the show presents a distressing portrayal of the troubles behind the legend, all set to some superb original show tunes.

Through the show, Norma Jeane (played by Sarah Rose Denton) remains on set.  A dishevelled, grubby, desperate woman joined by voices from her past, and her glamorous alter ego Marilyn Monroe.  Denton plays this part superbly and really is the star of the show.  Her every move elicits pity – admittedly a cringing sort of pity – for the desperate woman she portrays and her voice really was the best on stage, being audible above the dancers and backing singers yet not obliterating all around her.

Marilyn Monroe (Strictly’s Joanne Clifton) was a huge contrast.  Clifton’s dance background was evident in the physical element of her portrayal of Marilyn.  She oozed sex appeal with her posture and her gestures, becoming something of a caricature.   Wearing iconic costumes and having perfected her trademark pout she was Monroe at times.  Unfortunately, however, her voice didn’t match her physical prowess and was often inaudible, even when singing solo.

The supporting cast, playing various voices from Monroe’s past whirled us through a number of catchy songs, which if you ignore the cod psychology (it sometimes isn’t All About Daddy) were rather entertaining and provided far superior earworms to Candle in The Wind, which I had been humming all day.

It’s a brave subject for a musical, which as a genre we tend to expect to be frothy and

lacking substance, and as a whole I felt rather uncomfortable – in a similar way to Jack & Rose’s love story in the film Titanic rather eclipsing the maritime disaster.  To be entertained by someone’s distress felt unsettling.  That’s not to say that the writers rode roughshod over some difficult subject matters – they didn’t, they showed appropriate solemnity – but the whole experience felt voyeuristic and slightly grubby.  I wonder whether this is one of those stories best left untold?