Guys and Dolls is a seminal Broadway musical, a classic. Full of instantly recognisable characters, sing-along songs and adapted on to the silverscreen by luminaries such as Frank Sinatra and Marlon Brando.

But at its base it is a spangly curtain covering one of the worst periods of depression in American history and, intentionally or not, some of the raggedness of the age creeps into Chichester Festival Theatre’s performance. From the rather scatter-gun choreography of “Take back your Mink” to Richard Fleeshman’s lyric-distorting accent, this show lacks a little of the polish one would expect. There is, however, a hell of a lot to enjoy about this production.

Despite my early reservations about the clear age discrepancy between him and the vast majority of the rest of the cast, Richard Fleeshman is a throughly enjoyable and talented Obadiah “Sky” Masterson. He carries the suave gambler role with aplomb and hits the high notes of his numbers with crystal clarity. 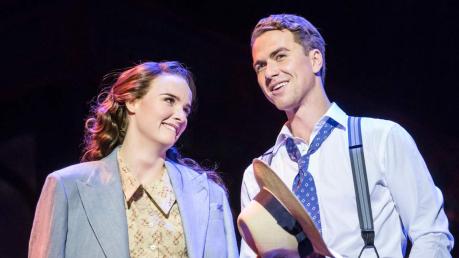 His voice is very easy to listen to and you can see how he has created a solid career for himself in westend shows. His commitment to the “Nu Yoik” drawl, however, does tend to affect his diction and on occasion rather twists his lower notes.

His relationship with Anna O’Bryne’s straightlaced and evanglical Miss Sarah Brown progesses nicely and the two leads have obvious chemistry. My only issue with their scenes together is that Sky’s sudden confession after their night in Cuba lacks any kind of relaistic build-up. Similarly Sarah’s rather laconic acceptance and reply to the revelation that their romance is based on a bet, is not reflected in her attitude once they return to the US. Perhaps sudden gambling based relationships are more palatable after a solid night of drinking and slapping samba dancers.

Some of the limelight is stolen from the main pair by the performances of Maxwell Caulfield and Louise Dearman as the perenially engaged Nathan Detroit and Miss Adelaide. Caulfield’s affable craps-game host carries the exposition scenes without allowing them to become dull and Dearman’ comic timing allowed Miss Adelaide to draw out a lot of the evening’s laughs.
The comedy pairing of Sangster and Edwards and Benny Southstreet and Nicely-Nicely Johnson added a welcome levity to the performance without devolving into slapstick and Jack Edward’s rendition of “Sit Down you’re Rocking the Boat” was without a shadow of a doubt, the highlight of the show. Melanie Marshall’s bombastic General Cartwright plays an fantastic foil to the rowdy crowd of gamblings sinners. With a few exceptions the choreography and dancing was tight and on-point with Chloe Chambers proving to be the stand-out of the ensemble.

Overall Chichester Festival Theatre’s redition of this Broadway classic was throrougly enjoyable, and while I didn’t choose to join the scattering of theatre go-ers who gave a standing ocavation at the end, I did rather very much enjoy myself. And if a few of the dances were a little ragged and a few of the accents slipped a little, who cares. Perhaps something a little grimier and less polished is a better reflection of Runyon’s original work.

Running until 2 July 2016 at the Marlowe and then on tour until 30 July. Can also be seen in the Westend
Book: Abe Burrows
Music and Lyrics: Frank Loesser
Director: Gordon Greenburd
Choreographer: Carlos Acosta