“My talk tonight is on the subject of love, in the presence of pain and suffering.”
This beginning quote, from one of C.S. “Jack” Lewis’s talks, perfectly encapsulates the content of the production and is used as a trope, 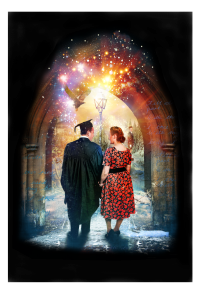 repeated by various characters to reinforce the growth of “Jack” Lewis through the various traumas that haunted him throughout his life; his bereavements, as both his mother in his childhood and his wife in his later years, were cruelly taken from him by cancer. I must confess that seeing one of my childhood literary heroes brought to life in such inimitable fashion by Stephen Boxer was extremely gratifying and left a lasting impression.

When Douglas Gresham, the boy that would become Lewis’s stepson, asks “Is it true?” of The Magician’s Nephew, Lewis’s somewhat evasive answer, that it is a story and true after a fashion, displays perfectly the conflict of an honest, Christian, intellectual man and a purveyor of beautiful fictions. Joy later explains that when Douglas asks if it is true, it is because he desperately wants it to be, that he wants magic to triumph over reality and whimsy to emerge victorious over scepticism. The setting, in the regal and understated Richmond Theatre, effectively and efficiently conveys the spirit of Oxford lecture halls, of cosy, ancient English houses, and of a place where magic just might exist.
The compact cast, comprising only those closest to Jack, in the form of his brother, eventual wife, stepson, and close friends are all excellent. They define Jack by the aspects of himself and what he is not: Rev. Harry Harrington displays his fluctuations and issues with faith and Christianity; Professor Christopher Riley shows the views of a dedicated bachelor and what would be called misogyny in a later period. Through this contrast, Jack’s gentility and kindness are accentuated. 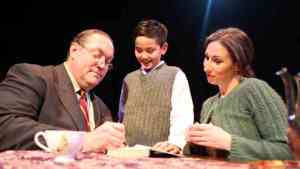 However, along with his now-outdated views come quick aphorisms and wit, representing a frankly admirable misanthropy: “What I resent about Christmas is the presumption of good will… Beware Christmas, Jack. Look what happened to Scrooge.”
There is a great deal of wonderful humour made at the expense of Anglo-American stereotypes and the nature of prying British eyes:
“Imagine if the neighbours only knew. Here they are, thinking that we’re unmarried and up to all sorts of mischief, and little do they know that we’re actually married and up to nothing at all.”

Amanda Ryan’s Joy Gresham is excellent. She represents a breath of fresh air, and is a faithful and admirable representation of a remarkable, talented woman, a fierce feminist and a gifted poet.
All in all, the play is exemplary. The performances are heartfelt and genuine, characters swiftly and brilliantly established, and show various snapshots of a true life, well-lived, and no less magical for being touched by tragedy. After all, what is life, but a story on the subject of love, in the presence of pain and suffering?
Running until 30 July

More details and tickets at http://www.atgtickets.com/venues/richmond