#Tweetingit – Pixie Lott was superb but this, unfortunately, did not make up for the show being, frankly, dull.

I should probably start this review with something of a confession.  Neither  I nor my companion at last night’s production of Breakfast at Tiffany’s had seen the film version starring Audrey Hepburn so we went to the show not knowing the story and without expectation. 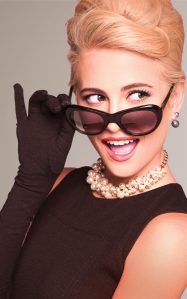 This proved to be a blessing and a curse.

I suspect had we known the lack of sympathy we’d have felt for the characters, or that Capote’s tale is one of the dullest ever told, but alas we went in full of hope which slowly drained out of us over the 2 ½ hour show (which felt far, far long.

The play started with “Fred” beginning his interminable narration of his obsession with Holly Golightly and for a moment I was surprised that they had chosen Matt Barber (of Downton Abbey) to play the part as an Englishman.  A few sentences later his accent slipped into east coast American though it sadly didn’t stick there, wobbling all over the states and back and forth across the Atlantic as the play dragged on.  His obsession with Holly was clear and his portrayal of a deeply unlikeable man very believable (though I understand he’s quite the poppet in real life) but let himself down, and undermined his own talent, with the meandering accent.

We met Holly, played by Pixie Lott, not long thereafter and she was superb.  I suspect when cast in such famous footsteps it’s easy to become a caricature of the actor who is synonymous with the role. 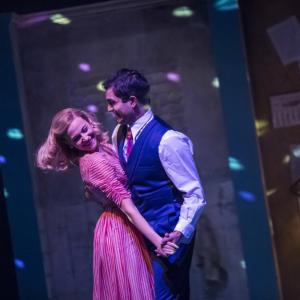 I didn’t see anything of Hepburn in her and her star quality really carried this play.  Often with pop stars taking a turn on the stage we see a one-dimensional version of acting, where they don’t quite nail the physicality of portraying a part which is equally as important as emoting through their lines.  Pixie nailed this – she was quite brilliant.

The supporting cast were also really rather good, many of them playing more than one role.  I particularly enjoyed Sevan Stephan who in his turn as OJ Berman channelled such perfect Danny DeVito that I was enchanted and Tim Frances, when playing Rusty, who could have been the inspiration for Anger in Pixar’s Inside Out.

It was a shame, given some of the stand out performances that the play seemed to drag forever onwards and failed in the simplest of theatre tasks – that of entertainment. 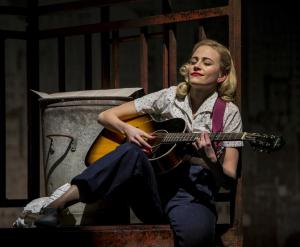 There were a noticeable number of empty seats in the second half, and at one point a thunderous snore rent the air from the rear stalls so I suspect this really isn’t many people’s cup of tea.  If, however, you’re a die hard Breakfast at Tiffany’s or Capote fan I suggest you catch it quickly because it’s unlikely to run and run.

Based on the novel by Truman Capote