Within five minutes you think you know exactly how the story will end and you’re right. There are no twists to move you and there is little character development to engage you as you progress towards the predictable ending.

Part of the issue is choice of cast and costume, the male lead needs to be presented as an extremely socially awkward man, who has used his sudden and unexpected money to purchase the outward signs of wealth, 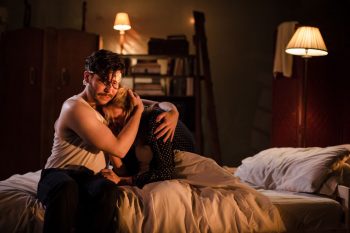 and to have done so badly. But he is actually presented to the audience as a well-dressed, well-groomed and attractive twenty something. If his major activity is collecting butterflies then he must do it in the gym, or butterflies might be heavier than I think.
At times his awkwardness seems to stem from class, at others from social or psychological problems. At one point he is flummoxed by the female lead gesturing for a chair, now I’ll have to check with my butler but I’m pretty sure the working classes occasionally gesture for/at or towards physical objects. And this leads to the overriding feel of the piece which was that it was underworked. In almost every aspect from design to blocking it seemed that the first thought was also the final one, leaving me quite annoyed and feeling disrespected as a member of the audience.

I think that the cast and director could have found more in the script to establish some sort of major effect but to be fair to them I do not think they could have found much more. The script really is predictable, the source material is half a century old and that is fifty years where the police procedural and the serial killer have become cultural staples to the extent that we’re certainly well versed enough to spot the tropes. But there was no attempt to subvert expectations or the form, no new questions were asked and no new perspectives were attempted. That only leaves doing the old thing really really well and that sadly did not happen.