A short walk from Tottenham Court Road tube station, I easily found the Phoenix Artists Club tucked quite logically beneath the Phoenix Theatre.  It immediately had the feel of a cosy, after hours private drinking club.  A long straight bar is decorated with signed photographs of various performers,

who have no doubt dropped in for a swift half over the years. Obscured by a black velvet curtain, I was convinced the performance area would be no bigger that a postage stamp. The venue grew crowded and increasingly stuffy as the start time approached.  Once inside, the audience struggled to get comfortable; some people had obviously been shopping, while another couple insisted on bringing their foldaway bikes in with them. However, we all got comfortable and a highly entertaining show started at 6pm.

I was however, right about the performance area as a 7 strong cast performed miracles on a pinhead as opposed to a postage stamp.  Shook Up Shakespeare are always true to their word and present the Bard’s work in a riotously funny alternative interpretation.  On this occasion they explored gender distinction and ambiguity conveyed by female characters in Shakespeare’s plays. Lil Davis played Jessica, Shylock’s daughter in The Merchant of Venice; Eboni Dixon played Rosalind, from As You like It, who spent most of the play 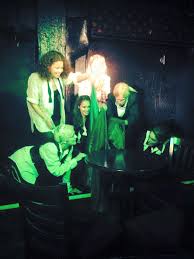 disguised as a boy called Ganymede; Maisie Greenwood played Imogen, daughter of the king in Cymbeline whose husband, Posthumus, wrongly believed she was unfaithful and ordered her to be killed; Nell Hardy played Julia,  faithful lover of Proteus in Two Gentlemen of Verona, who followed him disguised as a young man but discovered his infatuation with Silvia; Joanna Lucas played Viola from Twelfth Night, who disguised herself as a boy called Cesario to serve on Orsino’s staff; while Josie Paine played Portia from The Merchant of Venice, who disguised herself as a lawyer to thwart Shylock’s attempt on Antonio’s life. Genevieve Berkeley-Steel was emcee in the role of Moll, a contemporary character from the Shakespeare era who dressed in male attire and excelled in masculine activities.

The show was cleverly written and performed, using a variety of modern performance styles incorporating elements of scat, doo wop, acapella, rap and beat box.  The girls also plundered modern pop hits to support the narrative including Bowie’s rebel rebel, Lou Reed’s take a walk on the wild side and Beyonce’s if I were a boy. It throws up all kinds of questions about Shakespeare’s attitude to women and female characters, although there is no doubt they were integral to his work.  One section of the show delivered 30 killer lines in quick succession and virtually every line was spoken by a male character. So did female characters only become stronger when they posed as men? One thing is certain, strong roles for female actors are still an issue 400 years later!  A sharp, well observed production that deserves a much wider audience.

Written and Directed by: Helen Watkinson

Booking until: This show has now completed its run

For more information on future shows go to shookupshakespeare.com