#Tweetingit –  4*Three best friends sharing the highs and lows from High School cheerleaders through to middle age; a total blast!

Any show with ‘The Musical’ in its title was obviously preceded by a straight play or book.  The task for any musical adaptation is to retain the essence of the story and do 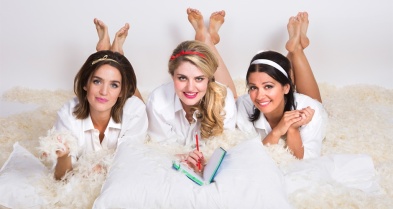 justice to its characters. Vanities – The Musical is one such example, but annoyingly the original play was never staged in London, so we are left to wonder how faithful it was to the original play.  It tells the story of three girls growing into adults from High School through to middle age; Kathy, the bossy one, Mary, the flirty one and Joanne, the flaky one.

We join them in 1963, all at high school and cheer leaders to boot.  Kathy seems to be the leader of the gang; serious and responsible, keeping the other two in line. Mary, is the incorrigible flirt, with all the boys on a string; and Joanne, is madly in love with Ted, the boy she obviously intends to marry and bear his children. The 1970s arrive with the girls at curious stages in their lives. Joanne is blissfully married to Ted now a hotshot lawyer, while she is knee deep in children but more than happy to be so; Mary has morphed into a vampish power dresser with big hair, owner of a gallery

specialising in ‘adult’ art; while Kathy, now a teacher is strangely single and living in a friend’s apartment. The drink begins to flow and old scores race to the surface, resulting in the girls parting on bad terms. The story concludes as they reunite in middle age and finally settle their differences.

The production moves smoothly through four Acts, tracing the girls’ lives from the 1960s, through to the 1970s and finishing in the 1980s, although isn’t as clearly signposted as the two earlier decades. Each Act features some neatly choreographed musical interludes, which broadly represent the musical style of the decade in question. For example, a decent impression of a 60s girl group is effected on Mystery and Cute Boys with Short Haircuts; while the 70s singer/songwriter is clearly in evidence on the well observed Friendship Isn’t What It Used To Be.  The final act features the wistful Letting Go, giving a passing nod to the 80s styled rock ballad.

The songs are bright and melodic; while the script delivers some great throw away lines which almost exclusively belong to Joanne. The only weak spot in the script was the lack of attention given to Kathy’s story. We have a pretty good picture of Mary and Joanne’s life, but Kathy remained largely unexplored as a character outside the girls’ 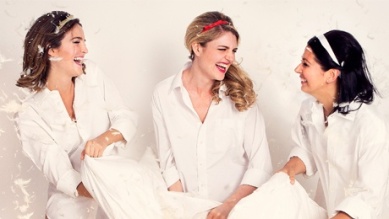 friendship. Trafalgar Studio 2 is a compact venue, with a cleverly designed set that makes the audience feel like its eavesdropping. A clean production is topped by an attractive, talented cast with Lizzy Connolly as Joanne; Ashleigh Gray as Kathy and Lauren Samuels as Mary. Vanities – The Musical does feel like work in progress, but with additional characters and songs it could grow into a much bigger production. Nevertheless, it has to be judged on entertainment value, and on this score it works wonderfully well.