#Tweetingit: 3* A fun update for a 21st century audience with an amazing set – Puccini and the East End are a great match!

Even for those of us who have never attended the opera the name Puccini will ring familiar, but I have to admit that I wasn’t quite sure what to expect when reading the synopsis. An

updated version of a revered opera set in modern day East London, sounded like a simultaneously great and terrible idea.

In the end it proved to be a very good idea, highlighting how universal and timeless key themes and tropes are; poverty, struggling artists, friendship, and romances that have more downs than ups.

The set design was by far my favourite part of the production. The Kings Head Theatre is unfunded, relying entirely on ticket sales and donations, and I truly commend the team for being daring and not letting their artistic imagination and ambition be stifled by a small stage and presumably even smaller budget.

Likewise the talent on stage is definitely something to boast about, the vocals were amazing with Roberto Abate playing the romantic male lead Ralph, Stephanie Edwards as Mimi, Thomas Isherwood as Mark, and Caroline Kennedy as Musetta. The cast complemented one another, using their powerful voices without attempting to outshine, which allowed for each character to establish themselves as distinctive personalities.

Much of the first half centres on character development and I found the characters of Mark and Musetta the most interesting; their witty and caustic lines were a good contrast to the love-at-first-sight romance of Ralph and Mimi. 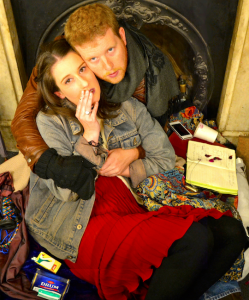 This isn’t to say I did not enjoy Ralph and Mimi, their sweet romance is the driving force of the plot and the audience cannot help but root for them – and there is certainly something fantastical about two neighbours in London talking to one another and falling in love without the help of tinder!

The first half was for me the more enjoyable, although at times the dialogue seemed to slip into relying on using swear words to gain cheap laughs, it was a lot of fun. The characters were developed enough over a short enough time and the first 50 minutes flew past with lots happening. I was excited to return from the 15-minute interval and pick back up on this momentum.

However, running for 100 minutes, the production is considerably shorter than its source material and this can be felt when the second half resumes. There is a large disconnect between the two halves, with the second half failing to capture the same energy and wit of the first. The second half takes place presumably a few months later, but the characters are not recognisable and the tone of the play dramatically changes, almost making it feel as though there was a missing act.

For me what made the second half a bit of a disappointment was the fact the dialogue did not expand on characterisation and it felt as though very little happened over a long time. This took away from the tension and ultimately made what should have been a sad touching scene seem unnecessarily drawn out.

However, I would still recommend this as an enjoyable time and especially to those who may feel intimidated or want a more relaxed introduction to the world of opera. This is an original and ambitious project that should be commended even if it falls a little short.