Tweetingit: 5***** – You will not find a single slip up in this nostalgia-fuelled musical. If you want to see an a-peeling production with endless laughs, this will be ripe up your Acacia Road.

Spoiler alert: This review has bunches of banana and fruit-based puns – you have been warned

When telling people I was going to see Bananaman the musical, there were two responses: “OMG that’s awesome!” or “ *confused face* HUH?”

Eric who lives on Acacia Road, who, when he eats a banana, turns into Bananaman, “Ever alert for the call to action!” He is a comicbook satirical superhero with the muscles of twenty men, the brains of twenty mussels and a jawline you can see from space. He is not the sharpest tool in the shed and often has to be guided by his friends in order to save the day.

Anyone born before or after those dates will sadly not know this character and may be in the category of those who are less likely to enjoy or understand why a musical has been made about a spoof superhero.

I, however, persimmon-ly loved this musical and thought it was grape. Fantastic two tier staging, pretty incredible costumes and some seriously big voices are just the start of why I think this show deserves to move to a bigger theatre.Funny with a witty and 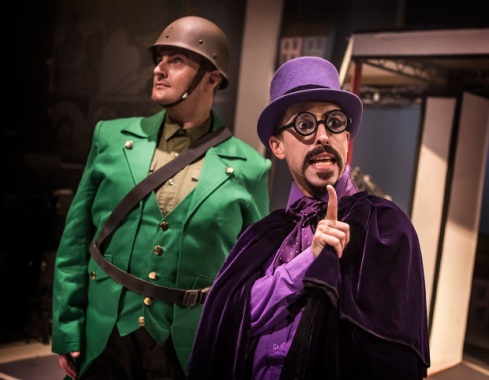 slightly slapstick script, enjoyable catchy songs and the best pear of comedy baddies you will see on stage this year, complete the reasons I think this is well worth going to see.

The cast really were very good. Eric played by Mark Newnham and Matthew Mckenna as Bananaman were excellent lead men. I thought there was a chance that, since it is a show in a small theatre for a short run, some of the ancillary characters may be weak but there was not a voice on the stage which let the cast down. Standout singing performances come from Jodie Jacobs as Bananaman’s sidekick, Crow, and Emma Ralston as Eric’s crush, Fiona Mullins, while Marc Pickering as the evil Dr Gloom just about stole the show with his excellent comic timing, stage presence and perfect evil comicbook character voice

The team have not tried to overcomplicate things using special effects or anything particularly clever. Instead they have embraced the ridiculousness and tomfoolery of this Beano character to create an authentic production without ruining the childlike feel – my favourite being how they make Banaman’s fly….

I laughed throughout the show, as did almost everyone around me. It has been interesting, however, to see that some others online have not had the same view as me.

This may be the epitome of a Marmite show, but I am pretty certain that those who remember this Superhero either as a comic book character or from TV, will enjoy every moment of it. Everyone loves some nostalgia and this is just that, wrapped in bright yellow and blue lycra skin.

The January blues can make a mango  (or woman go)  crazy, so If you want a fun evening out, don’t potassi- ummmm or ahh, just say “K” and slip down to the Southwark Playhouse for a grape night out.