A celebration of a much loved British writer, Jane Austen, Rob Winlow’s new musical Austen reveals the woman behind the words, and it tours the UK this Spring. 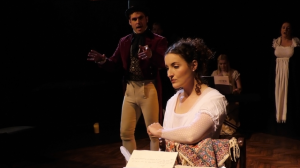 Following the bicentennial of her death, this is a portrait of an icon as a human being.

Austen investigates the life of an author struggling as much with affairs of
the heart as with ambitions for her art.

Billed as comical, tragic, and enchanting, Austen is a musical that explores the challenges a female novelist faces in patriarchal Georgian England. As Jane struggles to be published, she experiences the pressures, pleasures, and pitfalls of courtship with multiple suitors. The story remains resonant and poignant in these turbulent times as the fight for gender equality continues.

Writer Rob Winlow says, “The starting point and the question we ask, and ultimately try to answer, in thshow is how come Jane Austen wrote so eloquently about romantic affairs when she had seemingly few loving relationships and never married?”

We will be reviewing it on 22nd January – watch this space