When I was offered the opportunity to review Austen the musical, I approached the evening with hesitancy and intrigue. 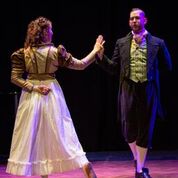 Hesitancy, because I’m always a little tentative when it comes to musicals –I’ve just never been a fan off all-singing narratives.

And intrigue, because I had a chance to learn a little bit more about the author whose work I have spent many an hour ogling over.  Intrigue won, and I’m happy to report, there was as much speech as there was song.

The opening number certainly set the tone. The lyrics forged a beginning, middle and end to the production; underpinning the notion that Austen’s taxed heart was the influence for her writing. As the summary indicated, the play unveiled the most influential points of Austen’s life – from snubbed proposals, to reciprocated love stolen by the unabashed hands of death – identifying moments where certain characters or plots could have originated. This unveiling, however, although autobiographical, touched on much more than Austen dear diary moments. 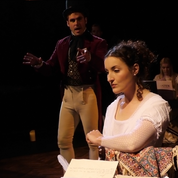 Although the 18th-century backdrop made the more transactional marriage proposals less shocking, what I did find troubling was Austen questioning whether her decisions to avoid a loveless marriage were the right ones. Or whether her literature – something she’d considered as close to her as children – was enough to justify her not becoming a wife or mother.

The reason I found myself troubled is that this theme drew too stark a parallel with the modern woman. This production was not set up to parade feminist ideals, however, by following the life of an unmarried and successful businesswoman from the late 1700’s, it was difficult not to flag the commonalities between Austen and any woman who’s ever had to justify their career.

The subtly yet strength of this message was beautifully riddled throughout the production by the use of a carefully constructed narrative which was a pleasure to see unravel.

The cast of four were also successful in injecting the right balance of ‘rehearsed spontaneity’, humour (special mention to the adlibbed gems delivered by actor Jenni Lea-Jones) and sombre scenes.

There was an abundance of wit and candid lines plucked from either Austen’s own work or the drafts of Shakespearean sonnets and, of course, no play would be complete without an 18th century melodramatic Gok Wan-type – complete with moss velvet trousers and guttural R’s. Overall, a thoroughly enjoyable evening which left me feeling closer to the woman whose books I’ve spent many an hour studying.