If you enjoy a theatrical start to your evening, then the Faults festival felt like a drama within itself, nested underneath Waterloo station in a graffiti-filled passageway was a dynamic venue well suited for the fringe.

Silk Road is a 60-minute solo show claiming to be the first bitcoin-funded piece of theatre. Bruce is a 19-year-old living with his Nan, battling loneliness and a sense of social exclusion in the North East. 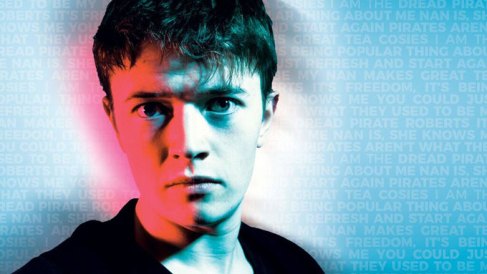 The audience is introduced to the darknet, and the characters entanglement with it, as he decides to shape his own destiny. The action begins as it ends with a strong image of Bruce, our protagonist petrol can in hand and toaster under his arm with a pile of books as tall as he is. As an audience, we are quickly drawn into his world and introduced to a rich array of characters as this story of easy money unfolds.

It takes quite a while for the inciting incident to take place shaking up his world, however, this does give the writer a good amount of time to introduce characters establishing well crafted and compelling subplots.

Josh Barrow works hard to bring his characters to life with enthusiasm and a strong sense of physicality, however, this is not quite matched by his vocal work. The structure of this piece must be praised as an enormous amount of action is crammed into the show and handled with skill and comedy familiarising and combining subplots with ease.

There are some stand out lines from Bruce’s Nan as she describes how she met her husband ‘our eyes met over a crowded caravan park’. My favourite of these characters was the bar manager Shaggy whose cocaine-fuelled Michael Jackson renditions had the audience enthralled. Although his love interest in the piece does feel quite thinly drawn as she was given somewhat supernatural qualities that have little resemblance to a real woman and she appears to only exist as a plot device.

Following a call-out on the real Silk Road forums for contributions to the original production’s crowdfunding campaign, an anonymous donor donated two bitcoin. Bitcoin value has since gone up, and plummeted, and gone up again.

Two bitcoin are currently worth $29,078 (about £21,405), and playwright Alex Oates has funded the entire production with cryptocurrency.

I arrived at the show not knowing a great deal about bitcoins or the darknet, this did not change. The intention of the show felt somewhat indistinct.  It was a very well-crafted piece of theatre with plentiful payoffs, callbacks and loose ends all being tied up neatly before the final symbolic scene. However, it felt somewhat hollow to me and without real substance a reflection of the bitcoin itself perhaps?