#Tweetingit –  3*** has its moments but over-elaborates a simple concept i.e. that it’s ok to be different. Interesting use of a Dolly Parton though.

The Vaults at Waterloo have been quietly building a reputation for daring and innovative theatrical productions. Buried deep under the railway arches, it is well named as a maze of cavernous passages lead into distinct performance areas.

The poetry we make is a story of our desire to be seen as we truly are. Curiously, Dolly Parton is a primary reference point for the piece, frequently throwing in Dolly-isms like find out who you are and do it on purpose. 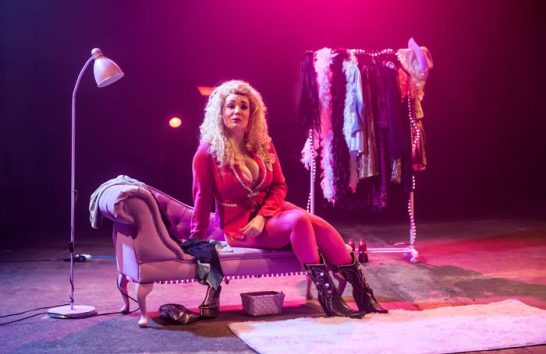 Well amen to that, but I wasn’t really sure what this 60-minute play added to the most modern of mantras  – be who you are. The story charts highs and lows in the relationship of Elliot and Robin (played by Elena Voce and Elijah W Harris).  Sam Thorpe-Spink plays their friend and sounding board Paul while Mia Hall plays Dolly Parton; although I was never sure whether she represented Dolly popping into their subconscious, or just another friend who enjoys looking and sounding like her.

The play features snapshots in their relationship but annoyingly jumps around disturbing the story’s chronology and pace. Elliot and Robin seemed to be happy in a steady relationship, but cracks begin to show as Robin feels he can no longer live a lie. Elliot begins a painful self-analysis only when social media makes a private matter very public property. Meanwhile, Dolly Parton, all blonde curls and pink lace sings the odd song and delivers some pearls of wisdom…if you want a rainbow you gotta put up with the rain…hmm?

The cast performs admirably but the script doesn’t provide enough depth to deliver any real message; nor does it properly examine the impact on Elliott or those close to her.  Yes, we can be who we are; it’s ok to different – just like it’s ok to have brown eyes instead of blue eyes. There’s never been a finer time to be comfortable in one’s own skin. Has the ship not already sailed on this one; it’s no longer seen as a taboo but a fact of life we all accept in modern society? Transgender issues are the subject of reality TV shows and pass by without exception; do we have to be inspired to own our identities and true narratives? The play has moments of clarity and means well, but does sound twee and almost patronising on occasion. Is there any need to expend time and effort stating what is so patently obvious?