Just five minutes’ walk from Liverpool Street station audience member/players/sleuths find themselves in a perfectly preserved 1960’s bar where they are greeted by a bevy of characters to quiz and clues to analyse.

Drop Dead is an immersive murder mystery event from A Door In A Wall where guests interact with characters, solve puzzles and crack codes to unveil the killer of an aeronautical engineer set during the cold war.

I start my sleuthing armed with a workbook outlining the suspects and leads to start uncovering the mystery.I felt there could have been something here to denote the start as you are just expected to read the workbook and get on with it.

Not being in a large group, my teammate and I, similar in our strengths and weaknesses, realising we are better at figuring out people than puzzles, got stuck on our first clue searching through foreign language dictionary’s in the most impossibly dim lighting, was this a ploy to make the uncovering of the truth even harder?! 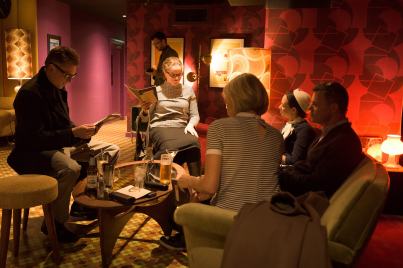 The actors were underused as they barely interacted with each other which was bizarre if nothing else as quizzing the Belgian Diplomat and learning Baccarat was such fun, I felt that they were missing a trick not utilising their performers, why employ actors if they are just dispensing information rather than performing? Set pieces from the actors that all the audience could witness, would have solved this issue, as I genuinely needed something to keep morale up as I found many of the clues too baffling.

An element of the evening that was not so enjoyable and I feel I must mention was the bar owner Sam Booker, a womanising, shady bar owner who either throws sleazy comments at the women that take his fancy or belittles those that bite back. Is there an argument to say he is a man of his time, yes, however, in an era of #metoo there needs to be some comment, or nuance to this kind of performance otherwise it just comes across as lazy and misogynistic.

However, the writing overall was incredibly clever and the level of detail and in-jokes could not be faulted, but maybe a little too clever? As a form, the immersive murder mystery, there are challenges to be met with balancing puzzle and performance, and the latter was considerably lacking. For cerebral types, I think this would be a great night, but much like the era it was set in the evening left me cold, desperate for something to bring the evening to life.