Who doesn’t love Pitch Perfect? The answer is no one doesn’t love it (if you can figure that double negative out) And so, what more can you want than the chance to see  the multi-award-winning British vocal group Sons of Pitches Live? I am booked in for the London show on 14th October and am expecting it to be quite the show! 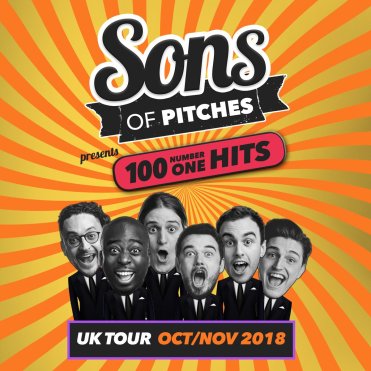 Expect fast-paced medleys and mind-bending mashups as The Sons of Pitches attempt to hit their target of 100 legendary tracks in just one evening. From Michael Jackson to The Beatles, ABBA to Eminem, the show caters to audiences of all ages and is not to be missed.

With over three million YouTube hits and a growing international reputation, it’s fair to say that ‘The Sons’ have “given a cappella a kick up the backside”.

Since their formation in 2010, the Sons of Pitches, which is made up of Joe Novelli, Joe Hinds, Jamie Hughes, Joe Belham, Josh Mallett and Midé Naike, have established themselves as one of the premiere vocal groups currently working in the UK.

The Sons of Pitches shot to fame in November 2015 when they were crowned winners of the BBC2 singing contest The Naked Choir, hosted by Gareth Malone, as their combination of soaring solos, impeccable harmonies and stunning beatboxing – mixed with a large dose of comedy – captivated the viewing public’s imagination.

With a programme of inventive pop covers, original numbers and entertaining improvised songs, the Sons of Pitches have performed at both public and private engagements with previous clients including Microsoft, Sky, ASOS, Nokia and the NFL, and headline performances on The London Eye, Hampton Court, the NEC Birmingham, Vale Fest, Greenwich Festival and international events in Hong Kong, Austria, Spain and the USA, together with a sell-out debut run at the Edinburgh Fringe Festival.

In addition, ‘The Sons’ completed three hugely successful headline UK tours throughout 2016 and 2017, performing 72 shows to over 60,000 fans.

Most recently, the Sons of Pitches starred as the house band on Sky1’s TV entertainment series Sing: Ultimate A Cappella, presented by Cat Deeley, who posted a picture of her with the band with the caption “My favourite guys in the whole wide world.”

Looking ahead to their ‘100 Number One Hits’ tour, the Sons of Pitches said: “100 Number One Hits is going to be our biggest, best and most ambitious show yet. We wanted to create a spectacle that would pay homage to some legendary artists while blowing away anyone who came to see it.

“Expect all kinds of genres, a bit of comedy and the odd tear jerker. We’ll be singing iconic songs from start to finish as well as juggling numerous hits in massive medleys. The audience will have to keep an eye on the counter clock to see how many we’ve got left to sing. Come along and count the hits!”

Tickets go on sale from 9am, Friday 16th March and will be available fromwww.livenation.co.uk and www.ticketmaster.co.uk

Sons of Pitches 2018 UK tour dates are as follows: