An unassuming pub in a leafy suburban street is now home to one of London’s most promising fringe theatres. The Bread and Roses is a five-minute walk from Clapham North tube station and currently hosting Talos II – the science fiction theatre festival of London. 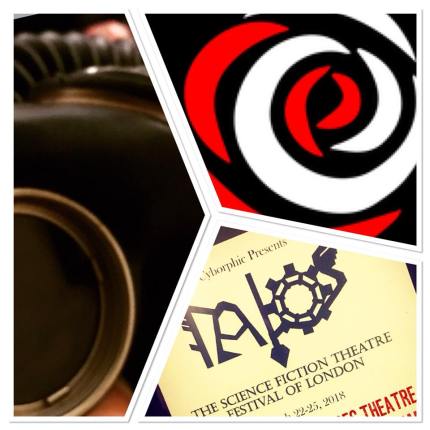 I attended on the second night and saw three plays that were equally challenging, confusing and engaging.

The first play For The Living was the shortest and most coherent piece dealing with the implications of cloning. The two central characters Ethan and Kara have cloned themselves; when the latter dies in a traffic accident the clone is activated in place of Kara. Ethan is conflicted by Kara’s death and scientific rebirth. Kara died in his arms but is elated because she is still here, but can’t grieve because Kara has a physical presence. It’s a fascinating premise that deserved much longer than the half hour it actually got.

The second play, Been On The Job Too Long, serves up a series of curveballs that destroy any notion of plot or narrative. It begins with the voiceover of a good old fashioned southern boy relating tales of life as a police officer. The self-styled King Brady then takes the stage dressed in an army trench coat with a sheriff’s badge attached. He completes the ensemble with a British copper’s helmet, truncheon and if I’m not mistaken an 18th-century musket tucked into his belt. The confusion deepens when Brady launches into a tirade against his enemies, particularly Starke whom he resolves must be run out of town. Radostin Naydenov as Brady captures an almost perfect southern accent which strangely which deserts him halfway through; but only after he beats seven bells out of Duncan, who apparently works for Starke (?). He then adopts a dreadful faux Cockney accent as the play descends into a chaotic mess. The conclusion (if you can call it that) suggested Brady was a Westworld style robot…although I was never entirely sure.

The final story Homo Superior was similarly enigmatic leaving too many questions and too few answers. Zara and Joe are patients undergoing an ‘extraction’. They are deposited into pods and subjected to physic evaluation. They prove to be a perfect match although neither wants to believe it’s true. We are told they are doing something vital for medical science. Zara suffered from depression and Joe walked with a limp, by the end of the play they didn’t (?).

The writers may have been searching for a deeper meaning that flew way over my head but very little made sense on any meaningful level. That’s not to say it didn’t have its moments. The plays were well presented and very engaging although I couldn’t explain why. I sense this is one for fans of the genre and unlikely to win new converts.

Writers: Chie-Hoon Lee (For The Living), James Martin Charlton (Been On The Job Too Long), Megan Fellows (Homo Superior).

Directors: Jay Head (For The Living), Simone Giustinelli (Been On The Job Too Long), Tess Agus (Homo Superior).