Tweetingit: 4**** A sparkling new treatment of a Gilbert & Sullivan classic. The Charles Court Opera are most certainly all ablaze with ever-living glory. But the tight performance area didn’t leave much legroom. In the words of Nanki-Poo “modified rapture!”

The earliest memory most people have of theatre are either school productions or amateur dramatics – and there’s a fair chance you would have seen a production of the Mikado by Gilbert & Sullivan at some point.

G&S sometimes gets a groan when mentioned; there being little or no royalties to be paid, am-dram companies the world over have performed their writings, to varying degrees of success.Despite the am-dram popularity, a fact that still amazes me is that this is classed as light opera. The vocal arrangements and required dexterity, therefore, are challenging even for hard-bitten professionals.

So I’m pleased to report the Charles Court Opera, very not am-dram, have made an excellent job of their latest production at the King’s Head Theatre. Although I have to say the dimensions were very tight.  A musical production does need more space to breathe, particularly where choreography needs to be accommodated. The normal bench seating felt much tighter than normal as one section of the audience sat at an angle, which meant craning my head back when characters entered stage left. That minor trifle aside, it was a formidable production of a show first performed in 1885.

The Mikado tells of machinations in the fictitious Japanese town of Titipu. Nanki-Poo, a poor wandering minstrel, arrives seeking the love of his life, Yum-Yum. 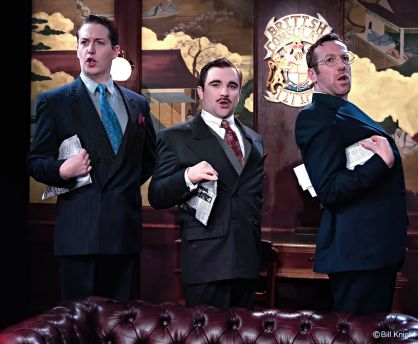 However, said girl has been made a ward of Ko-Ko, a former tailor now elevated to the post of Lord High Executioner. Ko-Ko had been sentenced to death for the capital crime of flirting but his appointment now means he cannot cut off his own head. This appointment has triggered the mass resignation of town officials. Nanki-Poo consequently seeks counsel from Pooh-Bah, who now holds all their posts and collects their salaries.

The seemingly non-sensical storyline (how does a convicted criminal become Lord High Executioner exactly?) pins it firmly to the realms of comedy and borderline slapstick – just like many of G&S’ shows. But a dazzling energy keeps everything ticking over with note-perfect solos and harmonised ensemble numbers, the most famous of which, three little maids from school,  was faultlessly executed by Alys Roberts, Jessica Temple and Corinne Cowling.

The script and songs were also cleverly adapted to include references to contemporary figures including Donald Trump, Theresa May and Simon Cowell. The production bravely wandered into ethnic stereotyping making the most of Ko-Ko’s backstory as a tailor. Philip Lee excelled in the role with a Fagin like presence, treading a fine line with skill and poise. Matthew Kellett was a memorable Pooh-Bah and displayed a magnificent baritone voice. Matthew Palmer effectively doubles up as the Mikado and Pish-Tush while Alys Roberts as Yum-Yum stands out most from the maids.

A brilliant cast is allowed to shine in a strong production that locates to the British Consulate in Titipu. Unlike other more traditional productions, the cast are styled as pre-war characters from an Agatha Christie novel. Similarly, the set stands in tribute to art deco style from the same period. The Mikado himself is pitched as a cigar-smoking General, all of which gives the show a whole new edge. This is musical theatre from the top shelf;  the Charles Court Opera most certainly are all ablaze with ever-living glory, if I only hadn’t had got the cramp!