George’s Marvellous Medicine is one of Roald Dahl’s darker children’s stories, telling the tale of a mean old grandma and how George replaces her medicine with a concoction to make her nice. 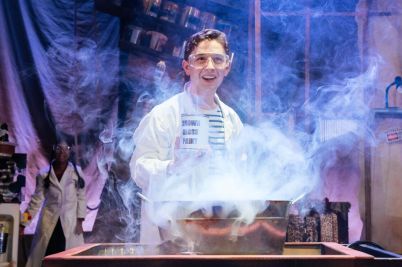 It might not sound like something you want your children to see, but this adaption of the famous novel kept an audience, who were mainly under 10 years of age,  transfixed for nearly 2 hours.

The close proximity to the stage at the Rose Theatre and a healthy dose of audience participation created a relaxed and entertaining production. There was very much a pantomime atmosphere that may not suit all adults, but the exaggerated characters lighten this dark tale and provide a context that engages kids, without encouraging them to create their own marvellous medicine!

Special effects and props were used to good effect and the children on cushions at the very front of the auditorium must have felt right in amongst the action. In particular, the music was well used and was crucial to the atmosphere on stage.

It was wonderful to see the musical talents of Justin Wilman who, while providing a solid performance as Dad, regularly disappeared to the side of the stage to pick up a number of different instruments.

Lisa Howard gave a fantastic performance as the nastiest Grandma around, pulling the character into modern day life, complete with a velour tracksuit and mobility scooter.Her bad granny antics meant that within seconds the room full of children were rooting for George (played by Preston Nyman).

Nyman showed tremendous energy and enthusiasm as George. He effectively encouraged audience participation, drawing the children in to help create the marvellous medicine. At times the dialogue felt a little slow and there were moments when the audience were waiting for Nyman’s next line. While I might have wished for a bit more pace from Nyman’s performance, there is no denying his talent as an entertainer or his skill in working with such a young audience.

My favourite performance of the afternoon was Chandni Mistry as Chicken, a strange character that she performed with humour and flair. She clucked convincingly and timed her squawking perfectly with a memorable (if harrowing) egg-laying scene that entertained both children and adults. It was just so silly, and I absolutely loved it.The Rose Theatre itself is an organised and intimate venue with a very professional front of house team. It is well-equipped for families with children, with a play area and a café as well as being in close proximity to a number of child-friendly restaurants.

Other highlights of the season include:

For further information on both the anniversary season and tickets for George’s Marvelous Medicine, go to www.rosetheatrekingston.org