The programme tells us that Circus Abyssinia explores a journey of wonders for two little Ethiopian brothers, a surreal explanation of how brothers Bibi and Bichu Tesfamariam found the joy of performing with the circus.  The troupe are formed from students at the circus school they founded in Addis Ababa and range in age from 13 to 24. 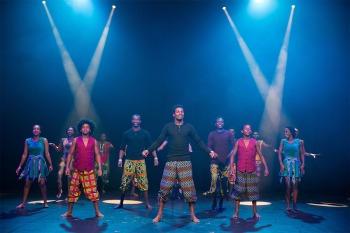 They bring a youthful, if unpolished, exuberance to the performance which seemed to ignite the crowd.

The show started explosively with the whole troupe taking to the round backed by resonant African beats – a theme that continues through the hour long show – and performing some impressive gymnastic moves.  Working with no apparatus or safety equipment they leap and are thrown in the air.  The athleticism and energy in the performance, not to mention the trust between the performers, was particularly impressive given the age of the performers.

After the opening number, the performances were separated by sex, with the young women performing feats of flexibility and grace, and the young men either clowning around or performing the more athletic moves. 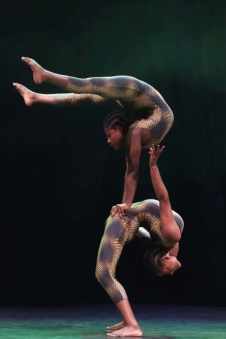 All the physical feats we saw were impressive in both their skill and their execution.  The strength and poise of the young women, when holding positions that no human should be able to achieve, was particularly noteworthy.  Bibi and Bichu came into the arena around halfway through the performance for a juggling display, one which was fun and noteworthy due to the enjoyment the performers clearly had in displaying their skills.

Were the performance just the acrobatics, the dance and the juggling I would have given it 4 stars, when I left I felt it deserved only 2 but was convinced that marking it down so harshly was unfair on the young stars performing amazing circus skills with such confidence and joy.  Why did I consider marking it down so far? 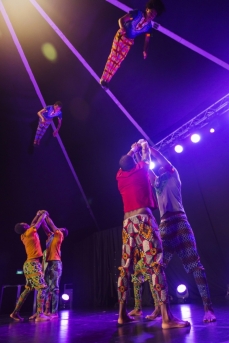 One of the troupe performed a solo piece which took a lot of the older clowning jokes – you know, the ones that weren’t funny when you were 4 – and built their performance upon these.  I could quite happily have ignored this, were it not for his behaviour when he took two “volunteers” from the audience. He faked groping the female volunteer’s breasts and at the end of the piece would not release her hand and made a big deal about keeping in touch (among other overtly sexist actions).  Making humour out of sexual harassment normalises these behaviours and keeps them as socially acceptable – newsflash they’re not.  This soured the performance for me so much that I wouldn’t recommend anyone see it, which is a shame as the circus skills elements of the show were very enjoyable.

Circus Abyssinia is at Underbelly Festival until 20 May 2018.