Now, I am going to be honest from the start, I am a huge John Barrowman fan and I went into this show beyond excited; I was certain it was going to be amazing. I did, however, have a slight feeling of nervousness; what if it wasn’t as good as I hoped? What if my John Barrowman fandom was misinformed? (spoiler: I can assure you it isn’t).

You can, therefore, either take this review as being something which was inevitable, or think that it must have been as incredible as I am about to tell you it was as, being such a fan, I would be more critical and, had it not been perfect, would have been super disappointed. (see Dirty Dancing the musical or the most recent version of Miss Saigon).

The format of the show is that Seth Rudetsky hosts the evening, interviewing John Barrowman, having spent a short time with him prior to the evening to get to know him. The questions posed are based on this get to know you session, but Barrowman isn’t pre-warned about what he will be asked. Seth knows this format works as it is not his first rodeo; he began his Broadway @ Leicester Square Theatre concert series with Patti Lupone in 2013, then returned last year with Audra McDonald. He is an amazing host – sassy, funny, incredibly knowledgeable about Theatreland, and not too probing or intrusive but with an ability to get his guest to open up. The answers and anecdotes Seth gently coaxes out of his guests lead to a suggestion of a song, at which point he retreats to the piano to accompany show-stopping number after show-stopping number. Despite having not known each other long, Barrowman and Rudetsky have a great chemistry and joke and chat like old friends.

There are funny moments and stories but the show does not skirt around the difficult issues. Barrowman opened up about being bullied as a child following his move from Scotland to Ohio – which resulted in him affective an American accent, his battle with the industry not wanting him to come out, as well as an HIV scare. 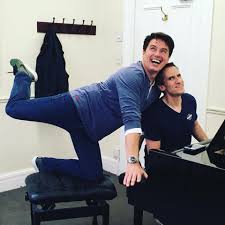 And then there were the songs. I have always loved John Barrowman’s voice but have only ever seen him live once – when I was 8 – in Miss Saigon. I have of course listened to his albums since, but even I was shocked and unprepared for the incredible pitch-perfect voice with which we were greeted. Many of the songs Barrowman was singing, are ones he has not performed for years and yet, the power and emotion that he brought to those songs was amazing. My jaw dropped on a number of occasions as he hit some impressive note with seeming ease

His arrangement of Loch Lomond came about as a result of his love of Scotland and was absolutely stunning while his Doctor and I (an adaption of the Wizard and I)  was funny and again, perfectly sung. We were even treated to a surprise duet with Anita Louise Combe who happened to be in the audience – proving the spontenaity of the show as well as Barrowman’s incredible ability to rise to the task of singing anything without rehearsal. Truly incredible, however, were I Made It Through the Rain and Marry Me a Little, which instantly gave me goosebumps.

There is pretty much nothing John barrowman can’t do – he truly is an all round entertainer. He has had success on TV, on stage, with writing and recording, in America, the UK and around the world, is a singer, an actor, and is extremely funny. He claimed to be nervous when he stepped on stage – after a spectacular entrance through the auditorium – but it didn’t come across and he was ever the amazing performer he is.

My only complaint is that I could’ve gone a few more songs but that’s purely because I could listen to him sing all night, and he nearly lost a star for the lack of sparkly suit – particularly since I wore a sequin dress for the occasion.

This is not a show just for John Barrowman groupies, musical theatre lovers or fans of Torchwood or Arrow. It was informative, entertaining, emotional and funny; anyone who loves a musical number or two, could enjoy this show. John Barrowman is ever the showman and star and I would love to see him back in the Westend. If you get the chance to see Seth with another guest, do go. And if you get the opportunity to see John Barrowman anywhere, go!