The dark side of 21st century globalism: a white Chicago teenager’s Facebook-facilitated conversion to radical Islam by a frontline ISIS fighter and subsequent indictment by a Muslim prosecutor. The writer’s (Selina Fillinger) choice of source material for Faceless can’t be said to lack inherent drama. But could a play do justice to the hyper-reality of this true story?

The new London home of this American production is the excellent Park Theatre’s smaller ‘Park 90’ studio space, and the suitably minimalist staging and makes good use of it.

The victim / would-be-terrorist Susie Glenn’s (Fiona Gent) extraordinary journey from finding faith and romance online to a solitary confinement cell in a federal jail is told through interactions with her defence lawyer (Sam Thorpe-Spinks) and recollections of the ‘faceless’ online manipulator. One of the most poignant moments is when she wants to discuss the Koran, rather than her plea bargain, with her prosecutor – who she reveals is the only Muslim she has actually met. Her ISIS seducer steers her away from the local mosque: her conversion is done by way of tweet. When she worries that there would be no witnesses, as is required, he tells her simply to add #ISIS – she’ll have many followers in no time at all!

Glenn’s character is written sympathetically and Gent’s interpretation manages to bring out the contradictions of stubborn teenager, repentant sinner and naïve victim, with the emphasis (one might think appropriately) on the latter. Her bewildered father (Fearon McElroy), who seems to view his daughter’s intention to join global jihad primarily as an exasperating slip-up,  completes the defence camp.

Given the strength, and potential depth, of this core narrative, it is unfortunate that it feels squeezed by a secondary plot: the prosecuting lawyer Claire Fathi’s (Paige Round) struggle with being pushed into the limelight for the wrong reasons and her own conflicted feelings about the trial. 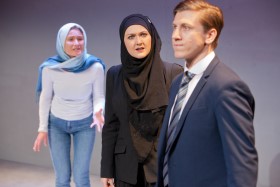 She considers the prosecution of Glen as her fight against ISIS, but her lack of sympathy is a little hard to square with her otherwise word-perfect liberal orthodox views. These are set up against those of her superior (Matt Mella), who viewers find a familiar type – a ruthless careerist showboat, but inevitably holding sound moral principles below the abrasive surface. Both parts are powerfully acted, but that adds to the tendency of this side of the play to dominate.

Although tempted at times to veer into a US court-room genre piece, slick direction helps keeps the tempo up for the 1¾ hours, and the performance enjoyable.  Ultimately, the chance to explore a global news story (multiple similar cases have played out in Europe) through a compelling individual drama makes Faceless worth a visit.