There’s always a certain amount of trepidation when one takes a four-year-old to the theatre.  A darkened room filled with strangers is not their usual environment. This means there is always a considerable risk that you will be the parent dragging a fractious, bored, crying pre-schooler across everyone’s eye line to prevent them spoiling the show for those with better-behaved children.

So it was with these nagging concerns that my four-year-old daughter and I set out on a beautiful, warm sunny April afternoon to go and see Fusion Theatre’s Stories from Around the World at Islington’s Pleasance Theatre.

The first thing you notice is that the performance space was small. It was dominated by the stern of a wooden ship from which a parrot, a butterfly, a giant beetle or a pair of giant googly eyes on stalks occasionally sprang.  This was enough to keep the younger members of the audience interested as they got to shout out whenever they spotted the different creatures. Once the performance began these props were put to good use as we were taken through three engaging stories narrated ably by Christopher Blackmore as Captain Cook.

From Rio at Carnival time to Bali, to ancient England, the actors did an excellent job of conjuring up the various different settings for the stories.  This immersion was helped by good direction and appropriate lighting and sound.  The performance made good use of the space, set and the few props used.

Due to the weather, the theatre was stiflingly hot.  Despite this the cast performed with energy and commitment which kept the audience engaged and, at times, mesmerized by the performance. They worked hard to evoke the weird and wonderful characters we met. Tanya Chainey, in particular, stood out for me for a very funny portrayal of King Arthurs Lady of The Lake.  For my daughter, Tanya stood out for her portrayal of a Knight of the Round Table who nearly defeated an opponent in battle with flatulence. 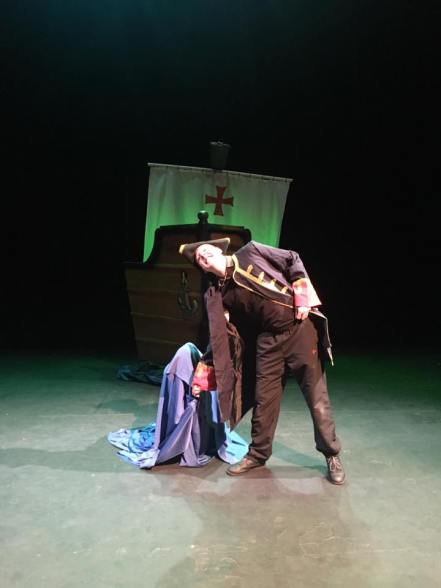 Generally, the writing was very good with much to appeal to both parents and children.  I did feel it could have been a little tighter in the few places where the pace of the stories being told slows.  But this in no way detracted from our enjoyment of the show.

Though there was some interaction with the audience I wondered if there might be more opportunities within the script for young audience members to interact or participate in the show. Rio Carnival was crying out for a throng of salsa-ing six-year-olds for example, and which pre-schooler wouldn’t want to be a part of the wall that got eaten by a giant beetle?

So, should you take your kids to see it?  Yes.  Fusion Theatre has delivered a  globe-trotting adventure that sweeps the audience up with enthusiastic storytelling and strong performances. And there’s plenty of laugh out loud moments along the way too.

Perhaps the most relevant opinion should be that of my daughter.  When asked if she had enjoyed the play she asked if we could sit down and watch it again from the beginning.  This level of enthusiasm for the arts is very hard won and is usually only reserved for the latest Disney release or Frozen spin-off.  Parents sometimes struggle to get their kids to engage with theatre so it is refreshing that Fusion Theatre has put on a performance that makes doing so easy.