I walked into the theatre humming, “Bare Necessities” but had to firmly remind myself that this is a new musical adaption of Rudyard Kipling’s famous book, NOT Disney.

But fear not children – it is still the same much-loved story and will still be just as entertaining for you as the film – and there are even so new songs to enjoy too. 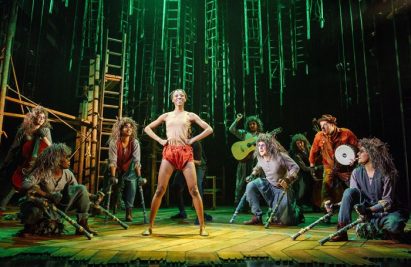 For those who inexplicably do not know the story of The Jungle Book, it follows the life of Mowgli the man-cub, raised by wolves in the jungle following the death of his father. As a result of Shere Khan the tiger having an ongoing contempt of man (it is understandable, he was literally burnt by one), Mowgli is in deep need of protection, so the rest of the jungle creatures come to his side to protect him from the tiger as he grows, until one day he realises what he is and that he cannot live in the jungle forever.

In this interpretation, by Jessica Swale, along with the standard story, a lot of time has been devoted to creating (and reiterating) that differences are to be accepted and that “everyone brings something to the party” – something which couldn’t be further from racists overtones which were rightly much criticized in the Disney version. Not only this but, although I have instinctively put “he” above, the creators have devoted much time to removing pronouns and making Mowgli a character which both little boys and little girls can look up to and think they can be like.

And so, on to the production. I have a feeling, this could be a Marmite (or Vegemite or other yeast extracts of our choice). I am certain children will love it and, perhaps that is all that matters. The adults, however, may not all be such big fans. There were a few slightly sloppy aspects and some missed opportunities. 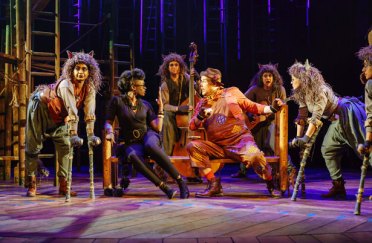 We have been spoilt by shows such as Running Wild, Cats and Lion King with their extremely realistic animal portrayals. Some of the animals in this, therefore, let it down a bit for me; the wolves on crutches for front legs, in particular, were not my favourite. Sadly, the aforementioned ladders in the rafters were also not used for swinging monkeys or slithering snakes. Shere Kahn’s sparkly catsuit and slight London harm accent, made him more of a panto baddie than the true villain than I would like but, again, the kids in front of me loved him. Meanwhile, the orangutans tried extremely hard to be “down with the kids” using language which would make most young people (and this slightly older person) cringy.

BUT, I do not want it to seem like this is a bad show as I really did enjoy it, I can just so how some people may not.  There were many positives. The music and lyrics by Jessica Swale and Joe Stilgoe, were seriously catchy and full of heart – in particular, was Mowgli’s theme song which ran throughout the show, beautifully and powerfully sung by Keziah Joseph. 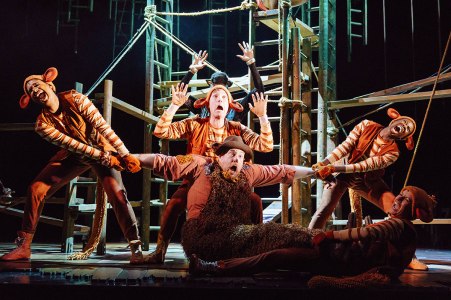 The excellent puppetry should also be applauded, in particularly Joseph’s work with the baby Mowgli puppet – I was very sad to see the character grow up as it really was expertly done. And adding to the laughs of the show was my personal favourite character, Balloo, played by Dyfrig Morris, a loveable, funny character with a powerfully deep voice.

Finally, the thing which impressed me most was my realisation that most of the characters also play instruments in the band. Double bass playing monkeys, drum playing bears (Balloo) and guitar playing tigers were not what I had expected.

Jungle Book is an enjoyable show, perfect for an all-inclusive family night out, with some catchy and poignant songs, comedy and a positive message for the kids to take home.

The Jungle Book is touring the UK until May 2018.

Running at The Marlowe until 29th April – http://junglebooklive.co.uk/

Ticket details for the Marlowe https://marlowetheatre.com/shows/the-jungle-book/