The marketing for this show is a striking image of an agonised figure reaching through a yellow wall, I was therefore quite ready for an atmospheric piece and a sense of ominous danger. The production is based upon an original short story by Charlotte Perkins Gilman, published in 1892.

We are introduced to the sarcastic and self-assured Alice who addresses the audience whilst waiting for her doctor’s appointment at 5 months pregnant.

What follows is a rather nifty time-lapse scene, where Alice’s doctor, played by Charles Warner, documents Alice’s slow decline from initial concerns around her mental wellbeing in late pregnancy to a difficult birth and subsequent post-natal depression, resulting in her baby being taken away, for the short term. And this is where the action begins, Alice spends more and more time in the yellow-walled room of her Husband’s newly inherited Summer House with peeling Wallpaper that gradually becomes to fascinate and obsess her, banned from writing, she snatches moments when left alone to write a fairy tale for her baby.

Charles Warner (‘NOT-ALICE’) multi-roles as Alice’s husband, maid, doctor and as the giant in her fairy-tale, it is here where he creates some beautiful physicality to Alice’s fairy-tale and some set lovely pieces. There are some nice directorial touches when Alice uses her books as stepping stones in her fairy-tale, transporting us from her yellow-walled room to a fantasy world.

The action is not served by the set as we are explicitly told in the text the airy room is decrepit, with peeling wallpaper in three different clashing shades of yellow, however, the wall the audience sees is pristine yellow with a spotless chaise longue. 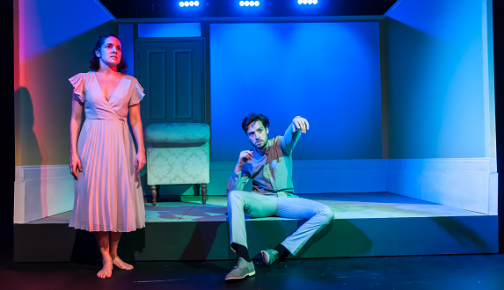 If the set had mirrored the description given in the text it may have helped create the haunting oppressive atmosphere that the piece promised but sorely lacks. The piece constantly hints as something that is never truly realised.

Much of the original short story’s tension and gender politics is lost in this production. Adapting works to different mediums can be challenging; the claustrophobia that is conjured when you read something in first person can evaporate when brought to the stage.

Art can be fragile; when you pick away at a story told with elegant minimalism it suddenly falls away, disintegrating before you, like tissue paper in the rain…or maybe that’s wallpaper?

For more details on tickets go to https://www.omnibus-clapham.org/event/the-yellow-wallpaper/2018-06-05/