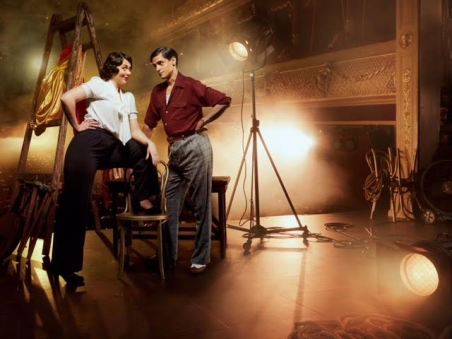 The musical is set back in the 1940s Baltimore, and the production takes such a tongue in cheek tone throughout that none of the outdated attitudes found in the script seem remotely sincere, but there’s no getting around the fact that Kiss, Me Kate doesn’t exactly smile kindly on its female characters for the most part.

Thankfully, there are however plenty of opportunities for Lilli, Lois and co. to shine in the musical numbers, thanks to Cole Porter’s canny musical offerings. As the ditzy up-and-comer Louis Lane, Zoe Rainey is brilliant, especially in the jaunty showstopper Always True To You In My Fashion, and its subsequent reprises, which get increasingly entertaining as they go! Stephanie Corley’s seething I Hate Men is also a high point, which sees Lilli traipsing around the stage bedecked in full Elizabethan garb, terrorising a lute-playing male co-star.

It may have plenty of high points, but on stage at the London Coliseum this production of Kiss Me, Kate looks a little bit swamped at times. 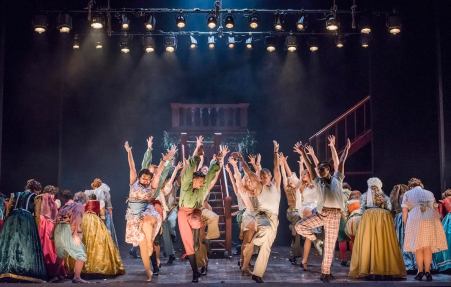 Big ensemble numbers like Another Op’nin’ Another Show, and Too Darn Hot, which should buzz with life and reflect the hubbub backstage at the theatre feel somewhat sparse as the admittedly rather sizeable ensemble spreads out to fill the huge space. Consequently, some of the character interactions are also easy to miss at times, and many of Lilli and Fred’s exchanges feel insignificant, making their will they won’t they relationship hard to get on board with.

That being said, the big ensemble moments are also some of the most joyous in the whole show. Aiesha Pease sings up a storm as Lilli’s dresser Hattie in the opening number, meanwhile the entire ensemble rallies around Stephane Anelli’s Paul in Too Darn Hot, a real high point to the second act, which showcases Will Tuckett’s exuberant choreography, and the musical virtuosity of the Opera North Chorus. Undoubtedly though, Tuckett’s choreography shines best in Alan Burkitt’s exciting tap solo, which takes place when Bill Calhoun expresses his love for Lois. His easy swagger and impressive dance skills make the moment come together in a way which is immensely satisfying to watch, and wraps up their B plot romance nicely. Joseph Shovelton and John Savournin are also excellent as the sincere and bumbling mobsters sent to collect the IOU for their boss. 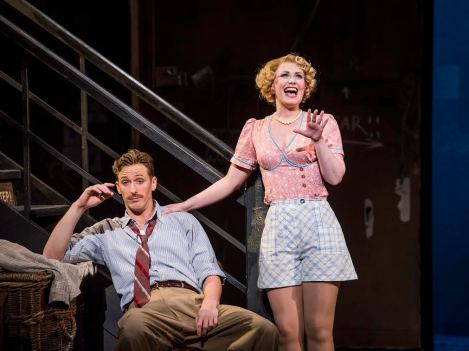 One of the comic highpoints comes at the end of the show when they attempt to leave the theatre and end up trapped on stage in front of an attentive audience, and are forced to improvise a musical number, Brush Up Your Shakespeare, complete with rather literal actions, and bouts of stage fright manifesting in threats directed straight at certain audience members.

The production is also skilfully designed, with Ben Cracknell’s golden lighting design casting a sepia haze over the stage, and further planting the piece back within its 1940s time period, and Colin Richmond’s sets offering the audience plenty of opportunities to glimpse backstage as the show goes on.

For fans of good old-fashioned musical theatre, Opera North’s grand production will no doubt go down a storm, with plenty of laughs, handsome production design and a host of fantastic musical numbers. It’s just a shame that its somewhat intimate story’s impact is diminished within the cavernous London Coliseum.