Last night I attended the press night of Miss Saigon at Norwich’s Theatre Royal and honestly I was so impressed with everything – from the singing to the set design.

Having never seen the show, but knowing a few songs and listening to the praise from others, I had high expectations – I wasn’t disappointed, in fact they were exceeded at every point and I can’t wait to see it again

Miss Saigon first opened in 1989 at Drury Lane Theatre Royal, and over time won the hearts of theatre-goers all over the world, claiming legendary musical status.

Set during Vietnam war, Miss Saigon primarily tells a love story, but one mixed with western lust for eastern women and the harsh realities of war-torn country. Having lost her family, young Kim ends up working for The Engineer in his stripper and prostitution club, Dreamland. The club, popular with American marines, is where Chris meets Kim and they fall in love. But as their story unfolds we witness love, hope, hardship and sacrifice – all universally relevant and poignant in the world we live in today. 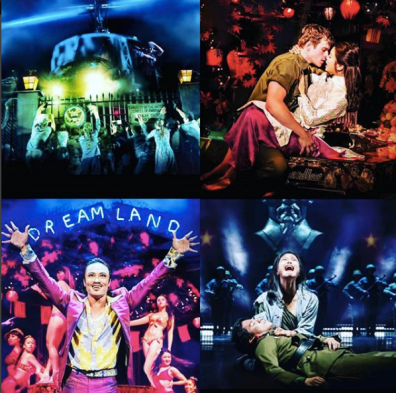 The musical score is amazing. I find Bui Doi particularly moving, Ryan O’Gorman (playing John) gave a powerful yet sensitive performance, while the Engineer’s Dreamland and American Dream provide excitement and energy to lighten up (not in all respects ) this emotionally heavy storyline.
Sooha Kim was beautiful to watch as leading lady Kim and her vocals were just as impressive. She portrayed every emotion with true heart and passion.

Ashley Gilmour played Chris a and gave a strong performance throughout but for me, Christian Rey Marbella stole the show for male roles. Playing The Engineer he brought the raunchiness to stage, but also gave an insight to his desperate need for success and the chance to get to America.

Scenes seamlessly moved from one to the next and each highly detailed. I really liked how the gates were moved and used to create different perspectives of the sane event. However the helicopter scene stole the show for me. I often see projected images used in musicals, but sometimes they detract from the greatness and can make a scene look amateur. This helicopter scene was far from that – it was incredibly impressive.

Tickets are limited, so if you’ve not already got some then get booking. Call the box office on 01603 630000 or check availability online here.

They are always on the lookout for new Tams – a boy (although sometimes played by a girl), aged 4-5, small, confident and SE Asian looking. For further info email joanne.hawes2013@gmail.com including a small head and shoulders photograph.