Ok, so let’s begin with clearing something up straight away; THIS IS NOT A MUSICAL. I have seen it before and was aware it wasn’t a musical but I did hear a few people at the interval saying that they were upset/confused/disappointed that it wasn’t a traditional musical with the cast singing, and rather it is a play with a soundtrack. To be perfectly honest, the idea of this show being a musical doesn’t really do it for me and so I am far happier that it isn’t a musical, but I just wanted to clear that up from the start. 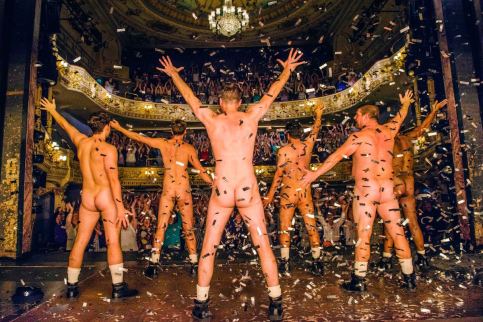 Now, on to the show itself. Based on the smash hit film starring Robert Carlisle, this cult film was adapted by Simon Beaufoy into a heartwarming, funny and very revealing stage show about a group of guys left unemployed, depressed and desperate after losing their jobs. Unsure how they will manage to get by, support their children, or keep up with the Joneses, what else is there to do after 6 months of unemployment than, for one night only, “waggle your willy” on stage to make a few bob? Once this idea is cemented in their minds, the task of gathering together a suitable selection of men, learning to dance, and selling out tickets are all just small obstacles which they need to overcome.

Led by the Hollyoaks hunk, Gary Lucy as Gaz, this gang of unlikely stripograms tell a touching, funny and heartwarming story. It is not just about a group of unemployed men. This show broaches some delicate topics and deals with them with real sensitivity and humour. Alongside unemployment, we see the men trying to cope with the issues of sexuality, body image, depression, self-worth, divorce and custody battles, as well as class and societal pressures and the cast portray it all fantastically.

Any audience member above about the age of 30 will recognise the majority of the cast, particularly Hollyoaks fans, as three ex ‘oakers could be found in this cast. Gary Lucy led the cast with cheek and charm (if not a slightly iffy accent to begin with), and was supported by Kai Owen who played Dave and, for me, the stand out performer of the evening, and “Finn from Hollyoaks” James Redmond as the *ahem* largely appendaged gay plasterer and hairdresser, Guy. 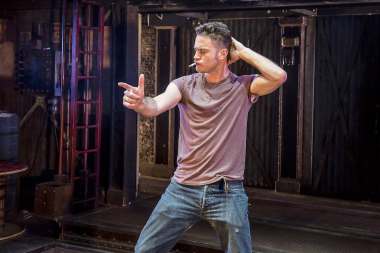 There was also Andrew Dunn who played Gerald, the Conservative former-foreman, Louis Emerick as Horse, and Joe Gill as Lomper, a depressed and suicidal young man rescued from his hard times by the others. Finally, is 16-year old Fraser Kelly who did fabulously well playing Gaz’s son. There is not a member of this star-studded cast which let the side down, nor a single one of the “bums of steel” who I wasn’t interested to see get their kit off!

There were far too many laugh out loud moments to pick out a single scene but this production is peppered with some fabulous moments, even at the most heart-wrenching times.  I am also sure fans of the film will be pleased to know the dancing in the dole line scene makes a much-welcomed appearance. And, of course, audiences will in no way be disappointed by the final scene! 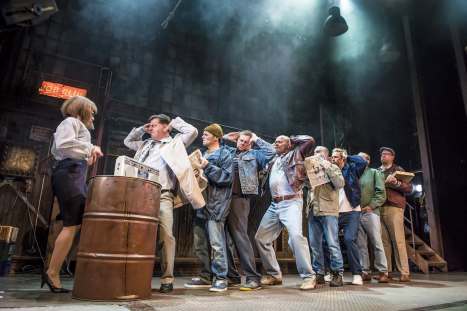 I have read elsewhere that is seems dated, and I could not disagree more. Yes, it is set sometime a few decades ago, and yes, there a big TVs and video players and old music, but the themes have been updated, the way in which the story discusses the themes is more modern and, more so than ever, with Brexit looming, an increase in people using food banks and a rise in male suicide, these stories are important to discuss, understand and face – and if we can do so with such humour, heart and a whole host of bums, all the better.

It is hard to imagine anyone else playing these roles, and this tour has been billed as the last in its present format with this cast, so I recommend you get your tickets and see it before it is too late!

Showing at the Marlowe until Saturday 2nd February

Booking information can be found here and for the tour here