An engaging story of a young Canadian called into WWI by the British Empire. One of the most decorated pilots of the war, Billy was an Ace Pilot.  Great acting and lively singing make this sad-sounding story a pleasure to watch.

Based on the true story of a Canadian First World War Ace, the play is a moving account of a fearless, and sometimes careless hero of the skies. Billy joins the cavalry to ‘fight the Hun,’ but despairs of the cold, the mud and the dust in the trenches.  Captivated by the sight of a fighter plane overhead, he talks his way into the Royal Flying Corps and becomes one of the most decorated pilots of the war.

Billy engages enthusiastically with the adventure of war.  His eventual symbolic importance in Britain brings friendship from members of the aristocracy, and he is shown-off to Churchill and eventually King George the 5th himself. There are poetic moments as well as vivid descriptions of dog-fights in the air and the inevitably moving deaths on the ground. The more sombre second half of the play shows the effect of combat on Billy; the excitement of hunting and killing the enemy, but the pain on confronting the death of young men like himself.

END_OF_DOCUMENT_TOKEN_TO_BE_REPLACED

Tweeting it: Bawdy Victorian Music Hall entertainment in the 21st century. Not for those who seek subtlety in their innuendo 3***

I didn’t expect to feel like I was at the panto when I went along to Above The Stag Theatre to see their musical Romance Romance in March, but that’s exactly where my brain went. I soon realised that it was slightly unfair to do so as the music far exceeded anything you’d find at a pantomime. Thank goodness.

And the music was glorious. Not particularly complicated or sophisticated but the melodies were catchy and the lyrics well written and beautifully delivered. This, along with the subtle-as-a-sledgehammer innuendo brought me to the Victorian Music Hall.

END_OF_DOCUMENT_TOKEN_TO_BE_REPLACED

Tweetingit: The story of a couple trying to cope with an autistic child is not easy viewing. Amid the negative publicity and controversy of this show you will discover a bravely written, brilliantly acted piece of modern theatre which needs to be seen.

Playwright Alex Oates seemingly doesn’t believe in doing things the easy way. First, he chooses autism as the subject matter for a play, then decides to represent an autistic child in the form of a puppet which has stirred up quite a storm of protest.

Many feel the play dehumanises autism by using a puppet to portray a non-verbal boy and the National Autistic Society were unable to support the play due to its use of puppetry. When I arrived at the Southwark Playhouse protesters were handing out leaflets.  A petition has been signed by over 12,000 people, and was heavily critical of the venue in its failure to provide more autism/accessible friendly shows.

I’m not an expert in the subject, nor do I have a child with the condition. My views may have been different if I had first-hand experience of autism so I can only provide my views in that light. I approached the play with an open mind and was determined not to pre-judge it.

END_OF_DOCUMENT_TOKEN_TO_BE_REPLACED

Tweetingit: 4* A true icon and his live show re-imagined; A hugely entertaining take on a greatest hits package. I defy anyone not to enjoy this show!

June 1983: post-punk, pre Band Aid and belted safari jackets were inexplicably in fashion. But more importantly, it marked the only occasion I saw David Bowie play live. The Serious Moonlight tour showcased the critically panned but commercially successful Let’s dance album. I happily ticked off the classics and revelled in the presence of a true icon. 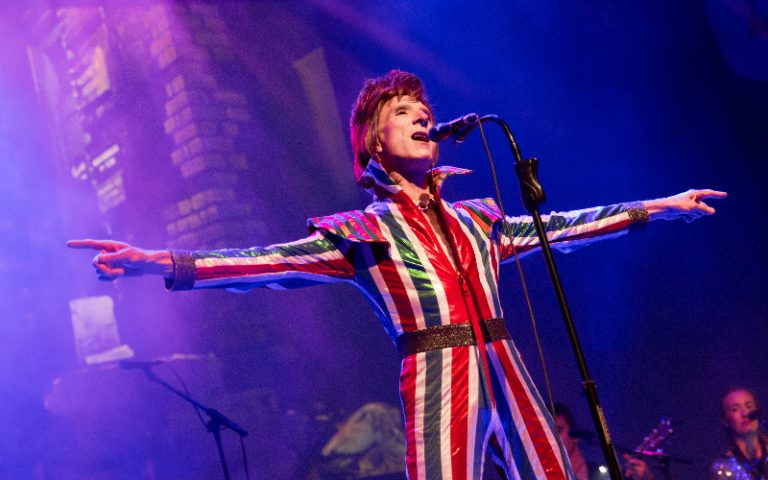 Thirty five years have passed since that memorable summer evening, and the Brixton boy is sadly no longer with us. Watching a tribute act is a challenge for the senses; you might disappear down the rabbit hole of YouTube for clips and draw a comparison. But having seen the real thing, one sets the bar unreasonably high. Going to the Hackney Empire further extends the nostalgia vibe; I was born and raised a stone’s throw away from the Empire, a once legendary music hall venue. But it has since relaunched as a theatre and is thriving with a variety of shows on offer. As the song goes ain’t nothing like the real thing; but overall, the Bowie Experience does a damn good job.

END_OF_DOCUMENT_TOKEN_TO_BE_REPLACED

I arrived at the Bread & Roses a little dubious as I’m not exactly a Shakespeare buff, despite a deep appreciation for his language I do sometimes struggle if the story telling is not clear and confident.

I was, however, reassured by the gender swapping title, that this interpretation would bring a fresh perspective on what can be a difficult narrative with problematic and mostly silent female characters.

The action begins with two of the ensemble throwing a tennis ball around the small stage, this sets the tone for the entire show as they have experimented with many elements of the play to shake it up.

A clothes rail, two mike stands, and a scant selection of props, reminiscent of a fancy-dress shop were used with simple elegance by Foster, Kupe and Mayhoub, transforming into some clearly drawn characters as part of the ensemble.

END_OF_DOCUMENT_TOKEN_TO_BE_REPLACED

Tweetingit: 3* A one act monologue charting the life experience of three gay men from the 1960s to 1980s. A tad predictable but nicely performed using first-hand accounts.

Presented as part of Queer Season at the King’s Head Theatre, Riot Act is a verbatim play based on interviews with three gay men.

Alexis Gregory has crafted a three-part monologue that neatly captures the last fifty years of gay lifestyles and experience. The King’s Head like any pub theatre was stifling even though the current heatwave has abated, but undoubtedly added a spark of atmosphere as the intimate performance area began to fill.

Essentially, the play uses gay stereotypes to tell its story; the Stonewall riots veteran, drag artist and gay rights activist are featured providing an effective backdrop to the narrative. First up was Michael, born in 1952 and allegedly the last survivor of the Stonewall riots in New York. Michael related a harrowing tale of friends and lovers who fell victim to the AIDS epidemic in the 1980s. Lavinia was born in 1951and known as Vin used his flamboyant personality to deal with hecklers and detractors. Like Michael, he lost scores of friends to the HIV virus, an unforgiving illness that stalked the gay community. Finally, there was Paul, 51 years old and leading light in the gay rights movement.

END_OF_DOCUMENT_TOKEN_TO_BE_REPLACED

Exchange Theatre has a laudable mission: to bring foreign plays to an English-speaking audience. For this alone they deserve huge credit. And their attention to classics is equally important: there is so much more to enjoy than endless outings of Shakespeare (for all his merits) and British audiences need more opportunities to explore it.

In this production of Molière’s comedy of manners, they take their internationalising ambition a step further: it is performed by the same cast in French and English on alternate nights. While clearly eye-catching as an idea, and despite the significant casting challenges that this approach inevitably raises, it isn’t clear that the audience on a given day reaps the benefit of this. There are some nods to this uniqueness, but it would have been nice to have some more substantial linguistic cross-overs. Happily, however, the play still has a strong cast, who moreover seem to enjoy their parts tremendously. They are led by director David Furlong as Alceste (the misanthrope himself), who provides range, along with a good dose of tragi-comic humour.

END_OF_DOCUMENT_TOKEN_TO_BE_REPLACED

Mountains of venerable leather-bound books greet the audience: neat, catalogued shelves on the right of the stage; disorderly piles on the left. And so the stage is set for a play of juxtapositions: man and woman; togetherness and solitude; Britain and America. It is only really this last cultural contrast which feels largely anachronistic (and no less amusing for it) at today’s distance from the story’s post-war setting.

Across hundreds of letters and a remarkable 20-year period and, a bond of deep friendship organically develops from a transactional business relationship between an antiquarian London bookseller, Frank Doel (Clive Francis), and his New Yorker client, writer Helene Hanff (Stephanie Powers). Other characters, primarily belonging to Frank’s world, come and go, but this true story is inescapably an epistolary dialogue, and Roose-Evans’ play whole-heartedly embraces that format.

END_OF_DOCUMENT_TOKEN_TO_BE_REPLACED

#Tweetingit – 2** promised to make us wet with excitement. Left us damp and disappointed.

The programme promised a lot.  A unique combination of world-class acrobatics, comedy and live opera performed in, on and around bathtubs.  Quite a bold claim to make, and whilst technically not wrong this just didn’t add up to an entertaining show. 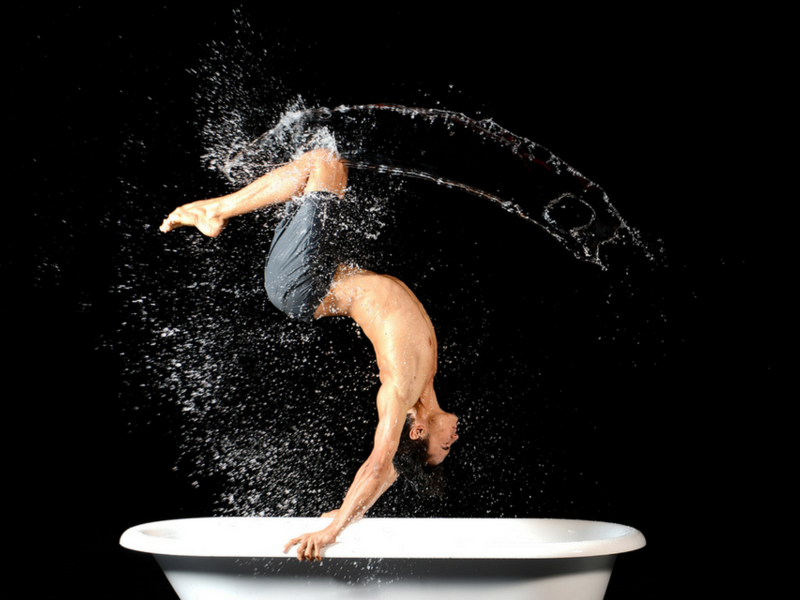 There were bathtubs, though goodness knows why. There were world-class acrobats performing impressive feats of strength, balance and grace – and doing so with wet hands and feet so extra points to them.  There was a woman acting like a particularly dim-witted child, I believe this passes for comedy these days.  There was a singer with an excellent voice singing cringingly unsophisticated bathtime-based lyrics to well-known classics.  There was lots and lots of splashing, and rather too much spitting for my liking.  It did exactly what it promised, but it was boring.