Immersive theatre is new to me I was therefore very excited to rummage around my wardrobe creating an 1840’s costume looking like a cross between ‘Mary Poppins’ and ‘Drucilla’ from ‘Buffy the Vampire Slayer’ (niche reference I know).

I was eager to meet ‘The Swell Mob’ described on the press release as ‘an explosive immersive theatrical experience, as dark as it is fun.’ On arrival you are ushered into a glowing, gothic, vaudeville world of troubled characters, most of which are either lost in their own heads or determined to invade your personal space and steal your drink! So that’s the dark part covered then.

The first set piece was ill timed with the audience so keen to get a drink at the very small bar, they missed the vaudeville ditty we were encouraged to learn and sing along with, resulting in a rendition reminiscent of a school assembly. This emerged as a theme as none of the ideas felt fully realised but rather started and abandoned.

END_OF_DOCUMENT_TOKEN_TO_BE_REPLACED

I arrived at the Bread & Roses a little dubious as I’m not exactly a Shakespeare buff, despite a deep appreciation for his language I do sometimes struggle if the story telling is not clear and confident.

I was, however, reassured by the gender swapping title, that this interpretation would bring a fresh perspective on what can be a difficult narrative with problematic and mostly silent female characters.

The action begins with two of the ensemble throwing a tennis ball around the small stage, this sets the tone for the entire show as they have experimented with many elements of the play to shake it up.

A clothes rail, two mike stands, and a scant selection of props, reminiscent of a fancy-dress shop were used with simple elegance by Foster, Kupe and Mayhoub, transforming into some clearly drawn characters as part of the ensemble.

END_OF_DOCUMENT_TOKEN_TO_BE_REPLACED

The marketing for this show is a striking image of an agonised figure reaching through a yellow wall, I was therefore quite ready for an atmospheric piece and a sense of ominous danger. The production is based upon an original short story by Charlotte Perkins Gilman, published in 1892.

We are introduced to the sarcastic and self-assured Alice who addresses the audience whilst waiting for her doctor’s appointment at 5 months pregnant. 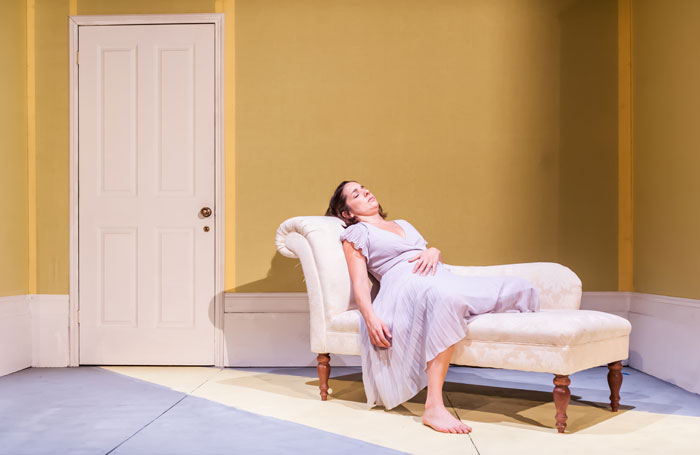 What follows is a rather nifty time-lapse scene, where Alice’s doctor, played by Charles Warner, documents Alice’s slow decline from initial concerns around her mental wellbeing in late pregnancy to a difficult birth and subsequent post-natal depression, resulting in her baby being taken away, for the short term. And this is where the action begins, Alice spends more and more time in the yellow-walled room of her Husband’s newly inherited Summer House with peeling Wallpaper that gradually becomes to fascinate and obsess her, banned from writing, she snatches moments when left alone to write a fairy tale for her baby.