The Charing Cross Theatre is one of the West End’s hidden treasures buried as it is beneath the arches in Villiers Street. The venue made its name in traditional music hall, but now presents a relatively rare event in the West End: a brand new musical. The Untold Theatre Company have created Grim, a tale of doomed romance and the power of love over death.

The premise is simple; Grim Reaper visits earth and meets Cupid, the adorable idol in every girl’s dream.  Cupid is immediately smitten and falls madly in love with Grim. Cupid is initially spurned but Grim is unable to resist his charms. So far so good, but Grim knows Cupid is in danger the closer he gets to her.  Irresistible forces clash as Cupid cannot be complete without his soul mate, and Grim knows she will take Cupid’s soul if she falls in love with him. 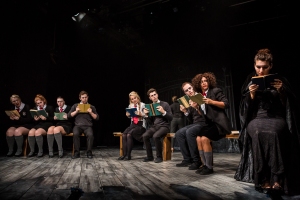 The story takes on the shape of a modern fable with songs reminiscent of a Walt Disney soundtrack. Not necessarily a bad thing, but the story has to be strong enough to fuel the imagination.  Alas, the plot is seriously under nourished and I could pick holes all over it.  For example, why would Grim enrol in school and make friends with Amelia, whose mother and brother died in a house fire? Also, whenever anyone goes near Grim they double over with chest pains…well she is the angel of death after all. But Cupid can’t keep away from her? Of course, logic is not the story’s driver. Love is all powerful. It reigns supreme and conquers all; death, destruction and evil deeds fall in its path while only love remains. Now we can see the Walt Disney angle…kerching. Just watch those suits in LA  writing the cheques! 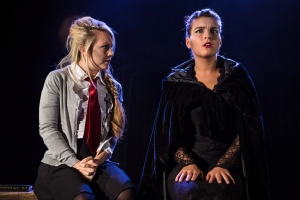 The songs are actually very good, pick of the bunch being she said yes and I wished for someone like you. But these are straight love songs and could have been slotted into any musical and consequently lack direct connection with the storyline. The production is also missing a showstopper, the big song that turns a good show into a great musical. The cast worked well as a unit and there were some pleasing performances, particularly Roseanna Christoforou as Grim, Anthony Matteo as Cupid and Georgi Mottram as Amelia.  On the whole, Grim has great potential but needs a lot more work.  The plot requires attention and a couple more numbers on the song sheet would be a massive help. I hope they’ve got Andrew Lloyd Webber’s number?!.  The biggest challenge is to tone down the negative elements of the story. A musical about death falling in love with Cupid?  There’s no reason why it can’t work, Sweeney Todd was massively successful and had a destructive killer at the story’s core.  But the script needs to be tighter with more humour (think Ghost guys).  Nevertheless, Fiona O’Malley and her creative team deserve much credit for their confidence in writing something completely new.