#Tweetingit – 4* A fabulous and seamless collaboration by amateurs and professionals to create one of Shakespeare’s best comedies.

In this, the year (and today date) of Shakespeare’s 400th anniversary, theatre companies are approaching Shakespeare in new and exciting ways, immersive productions, rarely performed versions, promenade performances, and tours,  trying to get as many people involved in and make people aware of Shakespeare as possible – trying to make people realise it isn’t just a dreary, must study and analyse-to-within-an-inch-of-its-life subject at school but in fact, a very entertaining piece of theatre and something for everyone.

This is exactly what the RSC are doing in a very literal way. Erica Whyman, Deputy Artistic Director of the RSC has joined professionals with amateur actors and a group of local school children to create this “Midsummer Night’s Dream A Play for the Nation.” In this huge task, Canterbury are just one of 12 regions who have joined the RSC in creating this play. By using state of the art technology, they have watched each other rehearse online and have only had a couple of weeks in person to actually perform together.

The amateurs in each part of the country are cast from all walks of life; estate agents, policeman, pub landlords. Our very own Canterbury Bottom completed the London marathon last year.  The Cardiff Flute works for the railway and Snout works in a patisserie, in London, Snug is a private hire driver and Quince a GP – just a flavour of some of the people who are combining their everyday lives with taking on this huge task. 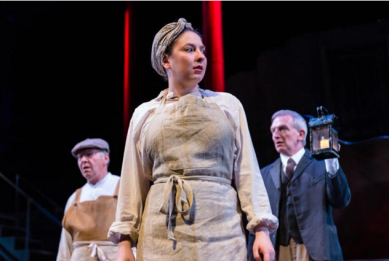 This lack of time to rehearse and their everyday jobs, therefore makes it even more impressive that, since I hadn’t looked at the program or read about who the amateurs were before the show (I didn’t want to make a judgement based on that knowledge.), that at the end of the first half, I had no idea who they were – just presuming that the school children playing Titania’s fairies were the only “amateurs on stage.” In fact, the amateurs were the ‘Rude Mechanicals’, a misfit group of trades people who put together the play with a play –The Tragedy of Pyramus and Thisbe – to celebrate the marriage of Theseus and Hippolyta.

The Mechanicals, it turns out, are six actors from the Canterbury Players – all of whom have somehow managed to fit enough rehearsal time in between their fulltime work, to be able to fit seamlessly in with the RSC actors! One in particular deserves special mention and that is Lisa Nightingale as Bottom, whose performance could easily, if she so wished, put her in any professional company. She played the attention seeking bottom with ease, her timing was excellent and she delivered every line perfectly. 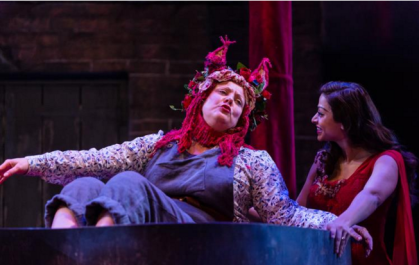 On RSC’s side, there is obviously nothing but praise here. In particular, Lucy Ellinson as Puck is extremely funny, bringing great physicality and mischievousness to the role. The four lovers, Lysander (Jack Holden), Hermia (Mercy Ojelade), Demetrius (Chris Nayak) and Helena (Laura Riseborough), who get caught up in Puck’s (sometimes accidental but ultimately chuckle inducing) mischievous ways also command the stage well and get better and better as the play advances – in particular is Nayak’s Demitius, whose spell induced desperation for Hermia seems to have no bounds as he hilariously competes with Lysander for her love.

Composer Sam Kenyon – has done a fabulous job of adding music to the play, aiding the transition of scenes and adding depth to the performance, and we even got to hear a little of Lisa Nightingale’s stunning voice as a result!

Oh, a  quick “story in a nutshell” for those who don’t know Midsummer – Hermia is due to marry Demetrius – she doesn’t want to, Helena does. Hermia wants to marry Lysander. Lysander and Hermia run away to the forest, chased by Demetrius and Hermia where, Oberon sees their plight and plans to use his love flower to ensure all is fixed and Helena gets her man.

Meanwhile, Oberon wishes to play a cruel trick on Titania and makes her fall in love with Bottom, one of The Mechanicals putting on a play for the marriage of Theseus and Hippolyta, who by this point has turned into an ass. Obviously, everything does not go to plan – not when Puck is involved, everyone falls in love with the wrong person and hilarity ensues. Don’t worry, after Oberon and Puck have had their entertainment (with them quite literally at one point treating it like their own reality TV program – watching it from the stairs with a bag of sweets) it does all come right in the end. 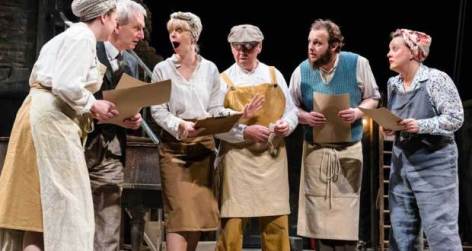 If you miss this at the Marlowe, make a long weekend out of it and take a trip to Stratford at midsummer where the Canterbury Players are having their hard work rewarded with an additional performance there. And if you don’t manage that, definitely make the time to go to see and support the Canterbury Players in their own right – clearly they have some fantastic talent!

Runs until 23 April 2016 when RSC continue to tour

For more information and what’s on for the Canterbury Players – http://www.thecanterburyplayers.co.uk/