A cheeky, rude, irreverent musical (definitely for adults!) that was full of funny, catchy tunes performed by a mix of puppets and human actors, rather like an X-rated Sesame Street.

Set in New York, everything on Avenue Q is not “a-ok”. The story follows Princeton (voiced by Lawrence Smith), a newly-arrived college graduate who moves to Avenue Q and meets a variety of characters including Kate Monster (voiced by Cecily Redman), Bert and Ernie-types Rod (and Nicky and a porn-obsessed Trekkie Monster, all struggling in their own way with the expectations of modern life.

Created by Robert Lopez (Book of Mormon, Frozen), Jeff Marx and Jeff Whitty, they ask a lot of the audience, as the puppeteers are not concealed and playing multiple roles, roaming an effective and attractive set with their puppets in hand.

Special mention goes to Cecily Redman who has an exceptional singing voice and is perfectly suited to her two characters, Kate Monster and Lucy the Slut. Each character sounded completely different and she shifted seamlessly between the two voices.  Lawrence Smith also shone as Princeton and Rod, bringing a fine vocal ability to the fore. 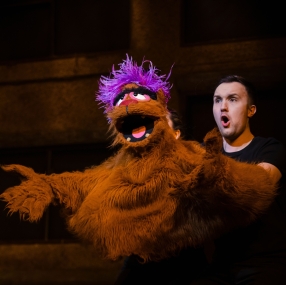 There were a couple of noticeable slip-ups that distracted from this otherwise impressive production, we later discovered that Ellis Dackomb covered the part of Trekkie at late notice, which might explain why there were parts that felt a little under-rehearsed. I do wish they had let the audience know this as given the late notice Dackomb did a tremendous job managing multiple parts.

As this tour gets underway we expect it to get better and better. Overall is was a highly entertaining production of a one-of-a-kind musical that will surely please many crowds on its UK tour.  If you have never seen it before, I would fully recommend it.

Avenue Q is at New Wimbledon until Saturday 9th of February. Tickets can be found here