After trawling through the sale rails in Oxford Street what better way to end the afternoon then with some fashion forward Shakespeare? 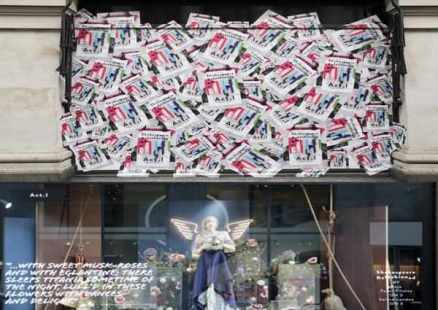 Selfridges have launched an in-store theatre – The reFASHIONed Theatre to mark the 400th anniversary year of Shakespeare’s death. Theatregoers will find themselves clearly among a fashion crowd as they are ushered into the 100 seater space by a Damien Lewis look alike,
once seated the traverse staging (fittingly reminiscent of a catwalk) provides some excellent people watching with an audience more suited to watching Marc Jacobs Fall Collection than the most performed Shakespeare comedy.

The play is a tale of two sets of lovers who have their emotions manipulated by others. This modern reworking was against the backdrop of a 21st century landscape.

Getting got off to a slow start with characters interacting with a ‘digital cameo’ on screen from Meera Syall in the guise of a news report on the war in Messina. This production also incorporated twitter and other ‘digital cameos’ from Simon Callow and Rufus Hound; this proved challenging as they were somewhat bolted on and the performance lost energy.

The play seemed to come to life upon the entrance of Don Pedro played with a warm ease and confidence by Jude Owusu. From this point on the performance seemed to gain momentum. The scene where Benedick is tricked into believing that Beatrice loves him was

managed with a lightness of touch and some hilarious physical comedy, with a feeling that the actors were enjoying themselves as much as the audience. There is always a challenge with a young cast to master the balance between deep emotional connection and performing physical comedy gaining the belly laughs that Shakespeare cries out for, however this was played to perfection by Daniel Boyds Benedick who charmed the audience with his awkwardness.

Alison O’Donnell gave a confident performance as Beatrice with her stand out moments where her vulnerability was exposed through cracks in her prickly exterior. Lowri Izzard (making her professional debut) handled the difficult role of Hero with an irresistible sweetness and her suitor Claudio played by

Harry Lister Smith had a strong sense of character. Leonato becomes Leonata with the solid and technically confident performance one would expect from Caroline Langrishe.

Overall the staging was slick and suited the Selfridges setting, the ‘modern twist’ and ‘digital cameos’ jarred and felt superfluous, however, this was a strong show with some delightfully funny scenes and some standout performances from Benedick and Don Pedro.

Produced By: The Faction Theatre Company