#Tweetingit – A feminist retelling of a classic tale complete with breathtaking acrobatics, and strength from the performers that appears to know no bounds.

The Waterloo Vaults are quite the experience; a rabbit warren of rooms, bars, dens and cubbies to watch plays, immerse yourself in an adventure and sit with friends to have a drink or 2.

We are guided towards the largest of the Vaults venues – The Forge.

I had already been in this room once that evening to see Neverland (link) so was surprised to enter it and feel like I was in a completely different place to the one I had left just 45 minutes earlier. In the darkness, the audience begins putting on their black surgical masks with which we had been presented to wear throughout the show.

As the lights dim we see, for the first time, the Ferryman, decked out with a glowing mask/helmet with lamp-like eyes and illuminated hands. 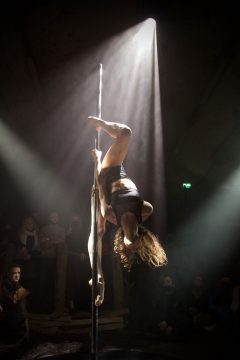 And so, we begin our trip to the underworld as Persephone, who was doing her own thing, minding her own business picking flowers, found herself being abducted by Hades.

I do not want to spoil too much of the production as it really must be seen to be believed. It is hard to put into words just how mesmerizing the all-female cast are.There strength and supplety appear to know no bounds as they perform interpretive dance, they tie themselves in ribbons, dangling high above the audiences’ heads, and perform stunningly beautiful pole acrobatics. Ann McDonnell performed a breathtaking pole routine, during which I am not sure I took a single breath.

The three Furies  (Rosie Bartley, Isobel Midnight and Jessica Pearce) do an excellent job of guiding the audience to the next performance space and entertain them during the interval (which sadly took some of the well-built tension away).

They also perform a number of routines themselves including a comedy juggling act and a fire poi routine.

The music alone is almost worth going to the show for and I would be tempted to go again just to properly listen to and watch the performers. The ethereal music created live by Becks Johnstone and Sam West is hauntingly beautiful and complements perfectly what was going on throughout the production. I will be hunting out a copy of their music!

If properly throwing yourself into the action of an immersive production – having to juggle, tightrope walk or do a backflip during the show was weighing on your mind – you need not worry.

Although this is described as “Dark immersive circus” it isn’t, immersive in the same sense as many other productions where you interact far more directly with the cast, talking with them and being part of the action. I would suggest that, although we had some interaction with the Furies during the interval, this is more like promenade theatre. Therefore, those who don’t like the idea of getting involved, need not worry.

This production, or in fact anything by Chivaree Circus, is worth going to see. This feminist retelling of the classic tale of Hades and Persephone encompasses the themes of female empowerment, love and choices perfectly while truly showing off the incredible skills of the performers.

There isn’t long left to go to see it, so grab your tickets as soon as you can!