Tweetingit: 3* an ideal opportunity to re-acquaint with familiar faces including Renton, Begbie and Sick Boy. However, truncated stage version loses some spirit of the original screenplay. But still great fun!

The dark, cavernous atmosphere of the Vaults in Waterloo would appear to be the perfect venue for Trainspotting Live. Most will be aware of the startlingly original film version from the 90s. One would naturally assume the stage adaptation would be a shoe-in. Although solid and entertaining, this production still left me with mixed emotions.

The slow descent into Leake Street leads into a dark alley adorned with Banksy inspired street art. The main entrance appears to be a lock-up and greets visitors with metal shutters if arriving early. Once inside, we were issued with glow stick wristbands and ushered onto the front steps. We’d heard rumours of audience participation; so slipped quietly into the back row when they weren’t looking. The performance area was an odd shape and felt more like a catwalk at a fashion show. The only props were a mattress at one end and a toilet bowl in the centre. It was an awkward space for the audience to negotiate. Visually, you chase the action from side to side, and momentarily lose characters if seated at the opposite end.

Although vaguely aware of the play I had not realised it pre-dated the film. The original novel by Irvine Welsh was published in 1993 while Harry Gibson’s stage adaptation first appeared in 1994; Danny Boyle’s visceral masterpiece, complete with its memorable soundtrack was released in 1996. Stage and film adaptations can be entirely different animals in their execution; I’d not read the novel in several years, so had the film fixed in my head as a template. 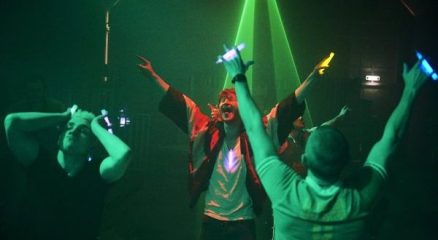 This proved to be a major obstacle in judging the play as a standalone piece. Subconsciously, I was waiting for my favourite scenes and lines to be replayed from the film. Spud was strangely missing from the character list; although Renton, Begbie, Sick Boy, Tommy and Mother Superior were otherwise present and correct. The play was forced into a tight 75-minute format greatly reducing the story’s depth and impact. The “choose life speech” captures the essence of Renton’s sad existence. He sees the alternative to heroin addiction but hates the routine of normality. Instead, he chooses not to choose life. Renton articulates the thoughts of his peers through the speech and captures the struggle that the audience will see over the next 75 minutes. 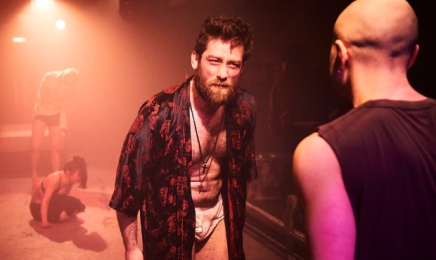 Renton picks up a number of scenes and lines that belonged to Spud in the film version. For example, the legendary bed sheets scene is wedged into the first 10 minutes, without consideration for a logical sequence in the plot. The job centre interview scenes were similarly diminished by Spud’s absence, and you soon realise how important he is to the story. However, the play gained from some excellent casting and sparkling performances, particularly Frankie O’Connor as Renton and Andrew Still as Sick Boy. Whilst the play is solidly produced in all respects, I was a wee bit disappointed. Would I have called it any differently if the film had never been made? Maybe I just expected too much?

Producers: James Seabright with King’s Head Theatre and In Your Face Theatre