Tweetingit: 3* A one act monologue charting the life experience of three gay men from the 1960s to 1980s. A tad predictable but nicely performed using first-hand accounts.

Presented as part of Queer Season at the King’s Head Theatre, Riot Act is a verbatim play based on interviews with three gay men. 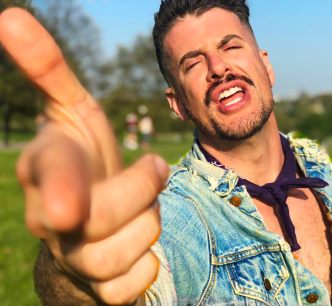 Alexis Gregory has crafted a three-part monologue that neatly captures the last fifty years of gay lifestyles and experience. The King’s Head like any pub theatre was stifling even though the current heatwave has abated, but undoubtedly added a spark of atmosphere as the intimate performance area began to fill.

Essentially, the play uses gay stereotypes to tell its story; the Stonewall riots veteran, drag artist and gay rights activist are featured providing an effective backdrop to the narrative. First up was Michael, born in 1952 and allegedly the last survivor of the Stonewall riots in New York. Michael related a harrowing tale of friends and lovers who fell victim to the AIDS epidemic in the 1980s. Lavinia was born in 1951and known as Vin used his flamboyant personality to deal with hecklers and detractors. Like Michael, he lost scores of friends to the HIV virus, an unforgiving illness that stalked the gay community. Finally, there was Paul, 51 years old and leading light in the gay rights movement.

Alexis Gregory packs an extraordinary amount of detail into 60 minutes on stage. However, there could have been a stronger narrative describing the Stonewall riots, a pivotal moment in the gay rights movement. Also, Michael and Vin were too close in age to provide any real contrast; their life experiences had been very similar albeit separated by the Atlantic Ocean. Paul represented the generation that followed and displayed a more aggressive, militant attitude towards prejudice. He too related heartbreaking stories of people taken far too soon.

Therein lays the real weakness of this play. All three characters related the same haunting spectre of HIV, and the devastation left in its wake. This gave the play an air of predictability as the same story was being told. It would have made more sense if the three characters featured were aged 70, 50 and 30, thereby drawing accounts from three different generations of gay men. This would have given the story greater symmetry and provided the historical perspective to which it clearly alluded. As Alexis so rightly pointed out, young men are still victims of homophobic attacks and can offer a modern take on the problem.

Having said that, riot act is a commendable effort to capture the thoughts of gay men across a generational divide and the constant struggle between mere tolerance and true acceptance.

Created and performed by: Alexis Gregory